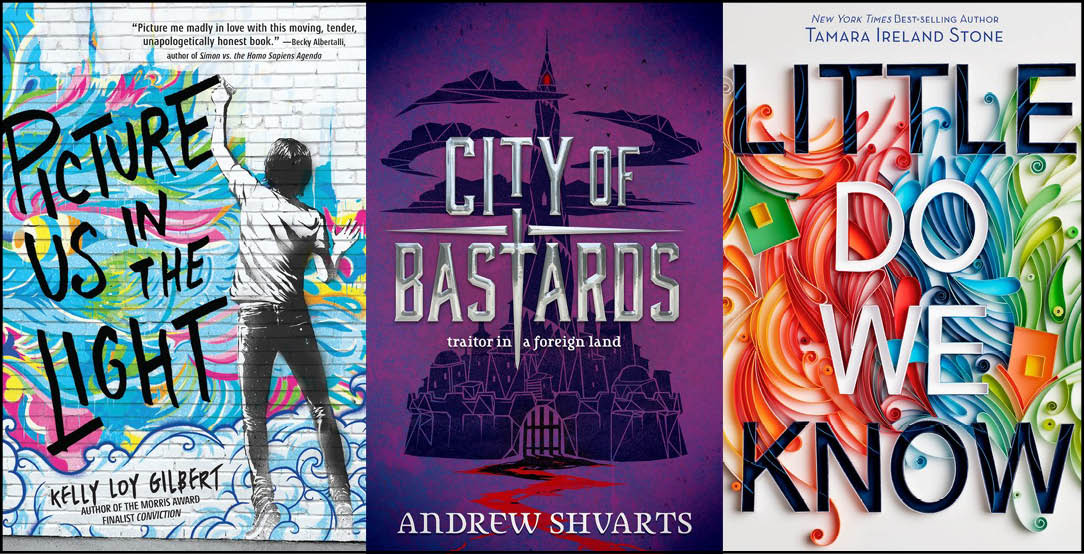 Parnassus Books is thrilled to present three of today's best young adult authors for a panel discussion and signing of their new books on Friday, June 8, at 6:30pm. Tamara Ireland Stone will discuss Little Do We Know; Kelly Loy Gilbert will discuss Picture Us in the Light; and Andrew Shvarts will discuss City of Bastards. Read on for important event guidelines, as well as more information about each author and their new book!

This event is part of the Parnassus Summer Bookout! Pick up your Summer Bookout entry card at Parnassus Books any time starting Friday, May 18. Attend five or more eligible events and have a bookseller punch your card while you’re at each event. Once your card has been punched five times, fill in your name and contact info and return it to Parnassus. You’ll be entered to win one of three incredible prize package, full of surprises, special bookish items, and signed books. All raffle entries are due to Parnassus by Saturday, June 30th, at 8pm. The raffle winners will be drawn and announced Sunday, July 1, by 12pm. For complete information, including the full menu of Parnassus Summer Bookout events, click here!

This event is free and open to the public. To join the signing line and have books signed by any author at this event, you must purchase a copy of either Little Do We Know, Picture Us in the Light, or City of Bastards from Parnassus Books, either in-store, over the phone, or online (scroll down). Your book purchase will include a ticket that will admit you into the signing line at the event. By purchasing a book from Parnassus, you are not only supporting a locally owned, independent business, but you are also showing publishers that they should continue sending authors to Parnassus. Beginning with our 2018 events, Parnassus event attendees may collect 10 eligible signing line tickets and redeem them at Parnassus for a coupon and a free tote bag.

More about Little Do We Know

Next-door neighbors and ex-best friends Hannah and Emory haven't spoken in months. Not since the fight-the one where they said things they couldn't take back. Now, Emory is fine-tuning her UCLA performing arts application and trying to make the most of the months she has left with her boyfriend, Luke, before they head off to separate colleges. Meanwhile, Hannah's strong faith is shaken when her family's financial problems come to light, and she finds herself turning to unexpected places-and people-for answers to the difficult questions she's suddenly facing.

No matter how much Hannah and Emory desperately want to bridge the thirty-six steps between their bedroom windows, they can't. Not anymore. Until their paths cross unexpectedly when, one night, Hannah finds Luke doubled over in his car outside her house. In the aftermath of the accident, all three struggle to understand what happened in their own ways. But when a devastating secret about Hannah and Emory's argument ultimately comes to light, they must all reexamine the things they hold true.

In alternating chapters, a skeptic and a believer piece together the story of their complex relationship with help from the boy caught somewhere in the middle. New York Times bestselling author Tamara Ireland Stone deftly crafts a moving portrait of faith, love, and friendship.

Tamara Ireland Stone writes young adult and middle grade novels. Her New York Times bestseller, Every Last Word, won the Cybils Young Adult Fiction Award, the Georgia Peach Book Award, and was a YALSA Teens' Top Ten pick. She is also the author of Time Between Us, which has been published in over twenty countries; its sequel, Time After Time; and Click'd, the first book in her new middle-grade series. Before she began writing fiction full time, Tamara spent twenty years in the technology industry. She co-founded a woman-owned marketing strategy and communications firm where she worked with small startups as well as some of the world's largest software companies. When she's not writing, she enjoys skiing, seeing live music, watching movies, and spending time with her husband and two children. She lives in the San Francisco Bay area.

More about Picture Us in the Light

Danny Cheng has always known his parents have secrets. But when he discovers a taped-up box in his father's closet filled with old letters and a file on a powerful Silicon Valley family, he realizes there's much more to his family's past than he ever imagined.

Danny has been an artist for as long as he can remember and it seems his path is set, with a scholarship to RISD and his family's blessing to pursue the career he's always dreamed of. Still, contemplating a future without his best friend, Harry Wong, by his side makes Danny feel a panic he can barely put into words. Harry and Danny's lives are deeply intertwined and as they approach the one-year anniversary of a tragedy that shook their friend group to its core, Danny can't stop asking himself if Harry is truly in love with his girlfriend, Regina Chan.

When Danny digs deeper into his parents' past, he uncovers a secret that disturbs the foundations of his family history and the carefully constructed fa ade his parents have maintained begins to crumble. With everything he loves in danger of being stripped away, Danny must face the ghosts of the past in order to build a future that belongs to him.

Kelly Loy Gilbert believes deeply in the power of stories to illuminate a shared humanity and give voice to complex, broken people. She is the author of Conviction, a William C. Morris Award finalist, and lives in the San Francisco Bay area.

More about City of Bastards

Tilla, bastard of House Kent, has it made. Safe from her murderous father in the dazzling capital of Lightspire, she lives a life of luxury under the protection of the Volaris King, alongside her boyfriend, Zell, and best friend, Princess Lyriana. So why isn't she happy? Maybe it's the whispers and stares that follow her wherever she goes, as the daughter of the traitor waging war against Lightspire. Or maybe it's the memories of her beloved brother, Jax, who lies cold in his grave even as she tries to settle into a life in the city's prestigious University.

Then Tilla stumbles upon the body of a classmate-a friend. The authorities are quick to rule it a suicide and sweep it under the rug, but when Tilla herself is attacked by a mysterious man with terrifying powers, she's convinced of a conspiracy. Her friends beg her to stay silent; what she's suggesting is impossible . . . and treasonous. But Tilla can't -- won't -- let it go. And the deeper she digs, the more questions she uncovers. How is the West beating the supposedly invincible Lightspire mages in battle? Is it connected to the shadowy cult wreaking havoc in Lightspire? Nothing is as it seems in the glorious capital, and Tilla's presence might just be the spark that sets the Kingdom aflame.

Andrew Shvarts is an author of novels and video games. He has a BA in English Literature and Russian from Vassar College. He works for Pixelberry Studios as a designer, making mobile games like High School Story, Choices, and more. Andrew lives in San Jose, California, with his wife, toddler, and two kittens.

Little Do We Know (Hardcover)

Picture Us In The Light (Hardcover)