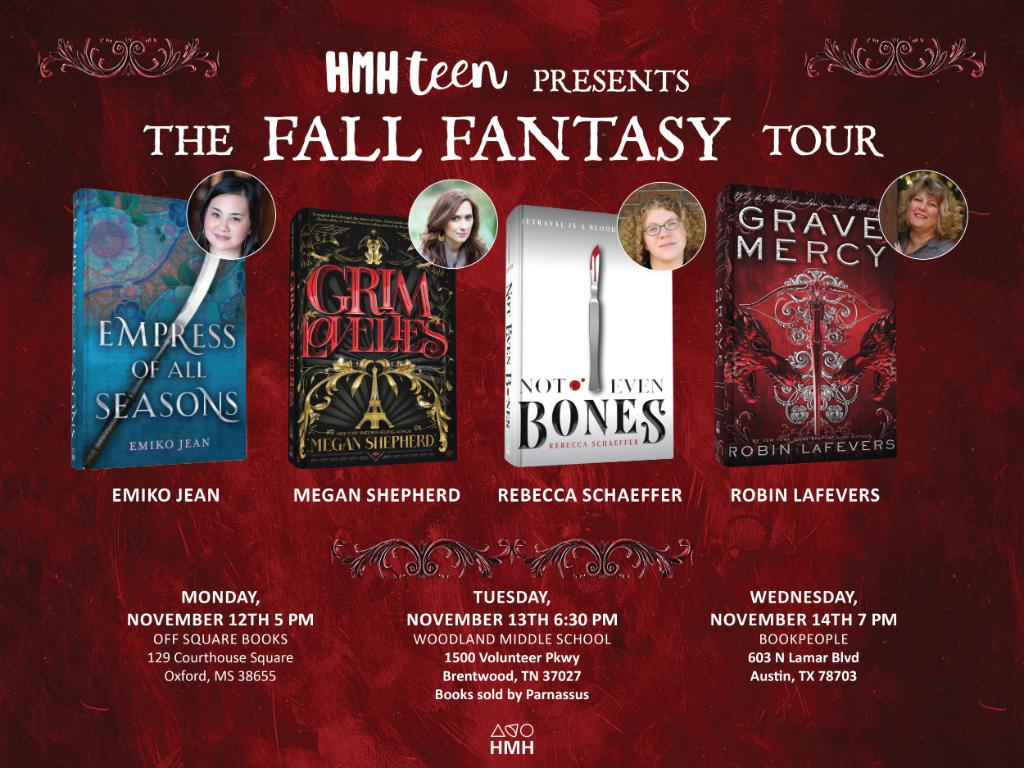 Parnassus Books is thrilled to partner with Woodland Middle School to present a YA author event with New York Times bestselling authors Megan Shepherd and Robin LaFevers, and exciting new talents Emiko Jean and Rebecca Schaeffer. This event will take place at Woodland Middle School at 6:30pm on Tuesday, November 13 and is free and open to the public. Keep reading for important event guidelines, as well as more information about each author and the book they'll be discussing!

This event is free and open to the public. Copies of each author's books will be available for purchase from Parnassus Books at the event; cash, credit cards, or checks may be used for payment. To join the signing line after the event and have books signed by an author at this event, please consider purchasing that author's newest book from Parnassus. The best way to support an author featured at a Parnassus event, as well as to support Parnassus for hosting the authors and the event, is to purchase the author's new book from Parnassus. Your purchase also demonstrates to publishers that they should continue sending authors to Parnassus and to Nashville. 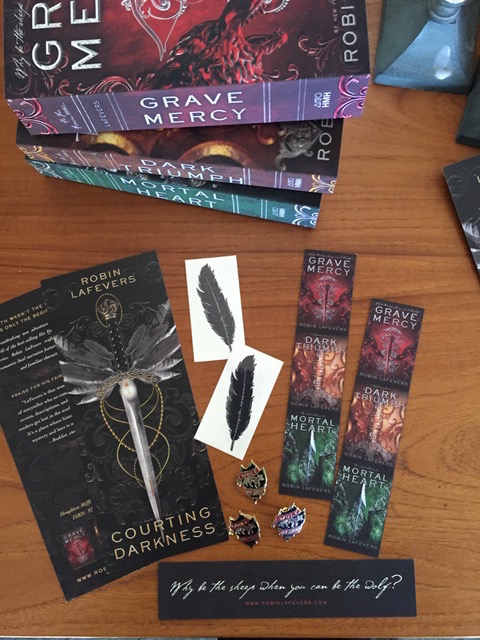 An exclusive free gift (pictured) is available with the purchase of Grave Mercy from Parnassus Books. The gift can only be included with orders shipped via priority shipping. If you select media rate shipping, we will not be able to include the gift with your order, per U.S. Postal Service shipping guidelines. Be sure to select priority as your shipping method if you wish to receive the gift. The gift will be available at the event with the purchase of Grave Mercy.

Seventeen-year-old Anouk envies the human world, where people known as Pretties lavish themselves in fast cars, high fashion, and have the freedom to fall in love. But Anouk can never have those things, because she is not really human. Enchanted from animal to human girl and forbidden to venture beyond her familiar Parisian prison, Anouk is a Beastie: destined for a life surrounded by dust bunnies and cinders serving Mada Vittora, the evil witch who spelled her into existence. That is, until one day she finds her mistress murdered in a pool of blood—and Anouk is accused of the crime. Now, the world she always dreamed of is rife with danger. Pursued through Paris by the underground magical society known as the Haute, Anouk and her fellow Beasties only have three days to find the real killer before the spell keeping them human fades away. If they fail, they will lose the only lives they’ve ever known…but if they succeed, they could be more powerful than anyone ever bargained for. Prepare to be spellbound by the world of Grim Lovelies, where secrets have been long buried, friends can become enemies, and everything—especially humanity—comes at a price.

Megan Shepherd is the acclaimed author of The Madman's Daughter trilogy, The Cage trilogy and the middle grade novel, The Secret Horses of Briar Hill. She lives and writes on a 125-year-old farm outside Asheville, North Carolina.

Seventeen-year-old Ismae escapes from the brutality of an arranged marriage into the sanctuary of the convent of St. Mortain, where the sisters still serve the gods of old. Here she learns that the god of Death Himself has blessed her with dangerous gifts—and a violent destiny. If she chooses to stay at the convent, she will be trained as an assassin and serve as a handmaiden to Death. To claim her new life, she must destroy the lives of others. Ismae’s most important assignment takes her straight into the high court of Brittany—where she finds herself woefully under prepared—not only for the deadly games of intrigue and treason, but for the impossible choices she must make. For how can she deliver Death’s vengeance upon a target who, against her will, has stolen her heart?

Robin LaFevers, author of the New York Times best-selling His Fair Assassin books, was raised on fairy tales, Bulfinch’s mythology, and nineteenth-century poetry. It is not surprising that she grew up to be a hopeless romantic. She was lucky enough to find her one true love, and is living happily ever after with him in California.

More about Emiko Jean and Empress of All Seasons

In the mythical empire of Honoku, humans and yōkai —a supernatural race of monsters and spirits—battle for dominance. Each generation, a competition is held to find the next empress. The rules are simple. Survive the palace’s enchanted seasonal rooms. Conquer Winter, Spring, Summer, and Fall. Marry the prince. All are eligible to compete—all except yōkai, whom the human emperor is determined to enslave and destroy. Mari has spent a lifetime training to become empress. Winning should be easy. And it would be, if she wasn’t hiding a dangerous secret. Mari is a yōkai with the ability to transform into a terrifying monster. If discovered, her life will be forfeit.  As she struggles to keep her true identity hidden, Mari’s fate collides with that of Taro, the prince who has no desire to inherit the imperial throne, and Akira, a half-human, half-yōkai outcast. Torn between duty and love, loyalty and betrayal, vengeance and forgiveness, the choices of Mari, Taro, and Akira will decide the fate of Honoku in this beautifully written, edge-of-your-seat fantasy.

Emiko Jean is the author of the psychological suspense novel We'll Never Be Apart. Her second novel, Empress of All Seasons, is inspired by her Japanese heritage. Emiko lives in the Pacific Northwest with her husband and children. Aside from reading and writing, she loves hiking and travel.

More about Rebecca Schaeffer and Not Even Bones

Nita doesn’t murder supernatural beings and sell their body parts on the internet—her mother does that. Nita just dissects the bodies after they’ve been “acquired.” Then her mom brings home a living specimen and Nita decides she wants out. But there’s a problem: Nita herself is supernatural being and a prime target for the black market if anyone ever found out. When Nita decides to help her mother's latest victim escape, she ends up taking his place instead. Even if she escapes, she’ll end up living her life on the run. Unless she eliminates the threat by wiping out the global black market. And to do that, there’s no line Nita won’t cross.

Rebecca Schaeffer was born and raised in the Canadian prairies, but her itchy feet have taken her far from home. You can find her sitting in a café on the other side of the world, writing about villains, antiheroes, and morally ambiguous characters. Not Even Bones is her debut novel.

Empress of All Seasons (Hardcover)

Not Even Bones (Market of Monsters #1) (Hardcover)