Virtual event with Suzanne Park, author of Loathe at First Sight, in conversation with Alexa Martin, Author of the Playbook Series

Parnassus Books is thrilled to welcome Suzanne Park author of Loathe at First Sight in conversation with Alexa Martin, author of the Playbook series.

This event will occur on the Parnassus Books Facebook page. 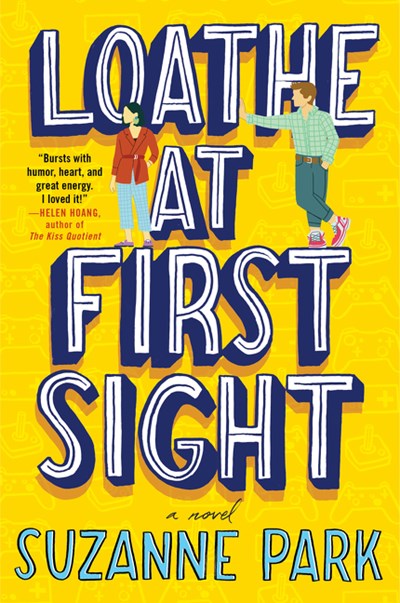 About Loathe At First Sight:

Melody Joo is thrilled to start as video game producer, but her dream job can be far from a dream. Namely, a team that consists of mostly male co-workers who make the term “misogyny” pale in comparison to their obnoxious comments and an infuriating — yet distractingly handsome — intern Nolan MacKenzie, a.k.a. “the guy who got hired because his uncle is the boss.”

While joking with a friend, she creates a mobile game that has male strippers fighting for survival in a post-apocalyptic world. Suddenly, Melody’s “joke” is her company’s most high-profile project — and Melody’s running the show.

With her pet project about to launch, Melody suddenly faces a slew of complications, including a social media trolling scandal that could end her career. When Nolan is appointed a key member of her team, Melody’s sure he’ll be useless. But as they grow closer, she sees he’s smart and sexy, but she’s here to work—and nothing more. She suspects one of her co-workers is behind the trolling sabotage. Could the man she’s falling hard for help her play the game to win—in work and love?

Suzanne Park is a Korean-American writer who was born and raised in Tennessee. Loathe at First Sight is her début adult novel, following her Young Adult romantic comedy, The Perfect Escape (April 2020). In her former life as a stand up comedian, she was a finalist in the Oxygen Network's "Girls Behaving Badly" talent search, and appeared on BET's "Coming to the Stage." She found this to be the funniest thing in her comedy career because, well, she is not black. Suzanne was also the winner of the Seattle Sierra Mist Comedy Competition, and was a semi-finalist in NBC's "Stand Up For Diversity" showcase in San Francisco. Suzanne graduated from Columbia University and received an MBA Degree from UCLA. After spending many years as a tech marketing executive, she turned to writing fiction full-time. She currently resides in Los Angeles with her husband, female offspring, and a sneaky rat that creeps around on her back patio. In her spare time, she procrastinates. Keep up with her at https://www.suzannepark.com.

Alexa Martin is a writer and stay at home mom. She lives in Colorado with her husband, a former NFL player who now coaches at the high school where they met, their four children, and a German Shepherd. When she’s not telling her kids to put their shoes on…again, you can find her catching up with her latest book boyfriend or on Pinterest pinning meals she’ll probably never make. The Playbook series is inspired by the eight years she spent as an NFL wife. The most recent book in the Playbook series, Snapped,  a football romance, was recently released (October 2020).