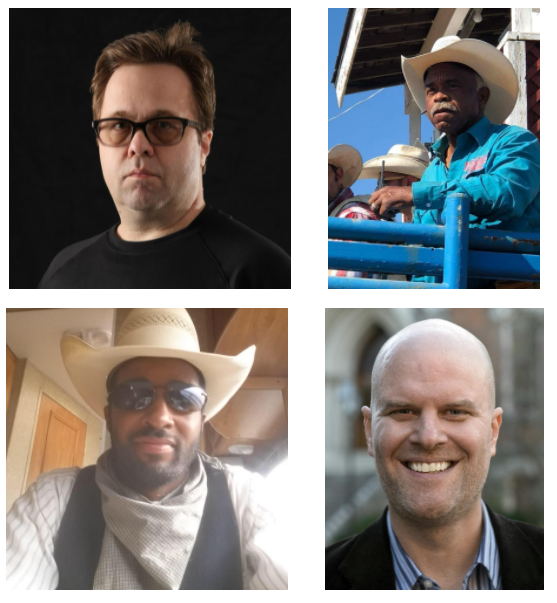 Parnassus Books is pleased to welcome Keith Ryan Cartwright to celebrate his new book, Black Cowboys of Rodeo: Unsung Heroes from Harlem to Hollywood and the American West. Keith Ryan Cartwright will be in conversation with Mike Latting and Glenn Jackson, with the discussion moderated by Andrew Maraniss.

This is a virtual event which will take place on the Parnassus Books Facebook page Thursday, November 4th at 6 p.m. Central Time.

They ride horses, rope calves, buck broncos, ride and fight bulls, and even wrestle steers. They are Black cowboys, and the legacies of their pursuits intersect with those of America's struggle for racial equality, human rights, and social justice.

Black Cowboys of Rodeo is a collection of one hundred years of stories, told by these revolutionary Black pioneers themselves and set against the backdrop of Reconstruction, Jim Crow, segregation, the civil rights movement, and eventually the integration of a racially divided country.

Keith Ryan Cartwright is a communications specialist for the Rutherford County Board of Education in Tennessee, an adjunct professor at Middle Tennessee State University, and a journalist. He previously served as editorial director and senior writer for Professional Bull Riders Inc. and is the author of Professional Bull Riders: The Official Guide to the Toughest Sport on Earth.

Glenn Jackson is a third-generation cowboy from outside of Houston, Texas. He is a seven-time Bill Pickett Invitational Rodeo tie-down roping champion and, in 2008, he was the first Black cowboy to win the average at the International Finals Rodeo in the tie-down roping. He is now a successful Hollywood stuntman with credits that include three seasons of Yellowstone and the forthcoming Black western The Harder They Fall (Nov. 3) produced by Jay Z and featuring Idris Elba and Regina King. Jackson is a member of the Screen Actors Guild.

New York Times bestselling author Andrew Maraniss writes sports-and history-related nonfiction, telling stories with a larger social message. His first book, Strong Inside, received the Lillian Smith Book Award for civil rights and the RFK Book Awards' Special Recognition Prize for social justice, becoming the first sports-related book ever to win either award. His young readers adaptation of Strong Inside was named one of the Top Biographies for Youth by the American Library Association and was named a Notable Social Studies Book by the Children's Book Council. His acclaimed second book for kids Games of Deception was a Sydney Taylor Book Award Middle Grade Honor Recipient, a Junior Library Guild selection, and was praised by authors Steve Sheinkin and Susan Campbell Bartoletti. Andrew is a contributor to ESPN's sports and race website, TheUndefeated.com, and is a visiting author at the Vanderbilt University Athletic Department.

Black Cowboys of Rodeo: Unsung Heroes from Harlem to Hollywood and the American West (Hardcover)