Salon@615 with Tamora Pierce, author of Tortall: A Spy's Guide 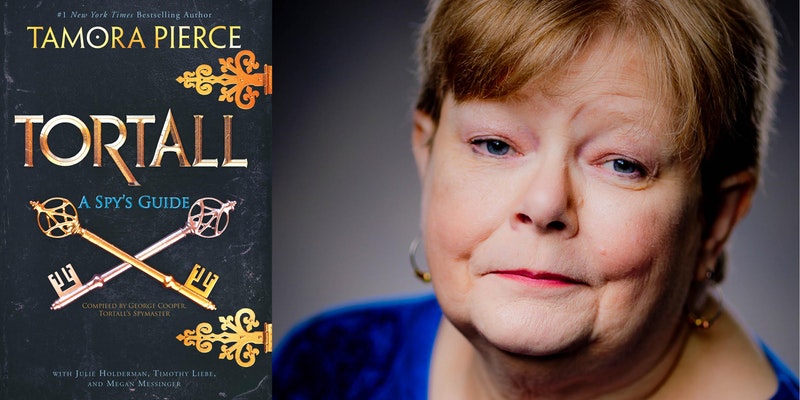 Salon@615 is pleased to present critically acclaimed young adult author Tamora Pierce, who will discuss and sign her new book, Tortall: A Spy's Guide, along with Julie Holderman, one of the book's co-authors.

Tamora Pierce is the #1 New York Times bestselling author of over eighteen novels set in the fantasy realm of Tortall. She first captured the imagination of readers with her debut novel,Alanna: The First Adventure. Since then, her bestselling and award-winning titles have pushed the boundaries of fantasy and young adult novels to introduce readers to a rich world populated by strong, believable heroines. Her books have been translated into many languages, and some are available on audio from Listening Library and Full Cast Audio. In 2013, she won the Margaret A. Edwards Award for her "significant and lasting contribution to young adult literature." Pierce lives in Syracuse, New York, with her husband, Tim, and their cats, birds, and occasional rescued wildlife.

Julie Holderman writes stuff and loves cats. A once-upon-a-time graduate of the Alpha Workshop for Young Writers, she returned ten years later to serve as a staff member. She studied writing and history at Ithaca College and is eyeing an MA in history, in pursuit of a PhD. She works full-time as Tamora Pierce’s assistant while building her writing portfolio.

To join the signing line at this event, you must purchase a copy of Tortall: A Spy's Guide from Parnassus Books. As a Salon patron, you will receive a 10% discount. A selection of Pierce's other books will be available for purchase at the event.

Tamora Pierce will sign up to four books per person; one book can be personalized, and three will be autographed. If you would like to have more than four books signed, you will be asked to wait until the end of the line as a courtesy. Additional books will only be autographed.

More about Tortall: A Spy's Guide

As Tortall’s spymaster, George Cooper has sensitive documents from all corners of the realm. When Alanna sends him a surprising letter, he cleans out his office and discovers letters from when King Jonathan and Queen Thayet first ascended the throne, notes on creating the Shadow Service of spies, threat-level profiles on favorite characters, Daine’s notes on immortals, as well as family papers, such as Aly’s first report as a young spy and Neal’s lessons with the Lioness. This rich guide also includes the first official timeline of Tortallan events from when it became a sovereign nation to the year Aly gives birth to triplets. Part history, part spy training manual, and entirely fascinating, this beautiful guide makes a perfect gift and is ideal for anyone who loves Alanna, King Jonathan, Queen Thayet, Kel, Neal, Aly, Thom, Daine, Numair, and the unforgettable world of Tortall!

This Salon@615 is a free, ticketed event. Seating may be limited. Your ticket does not guarantee you a seat, but we will accommodate as many standing-room audience members as possible.