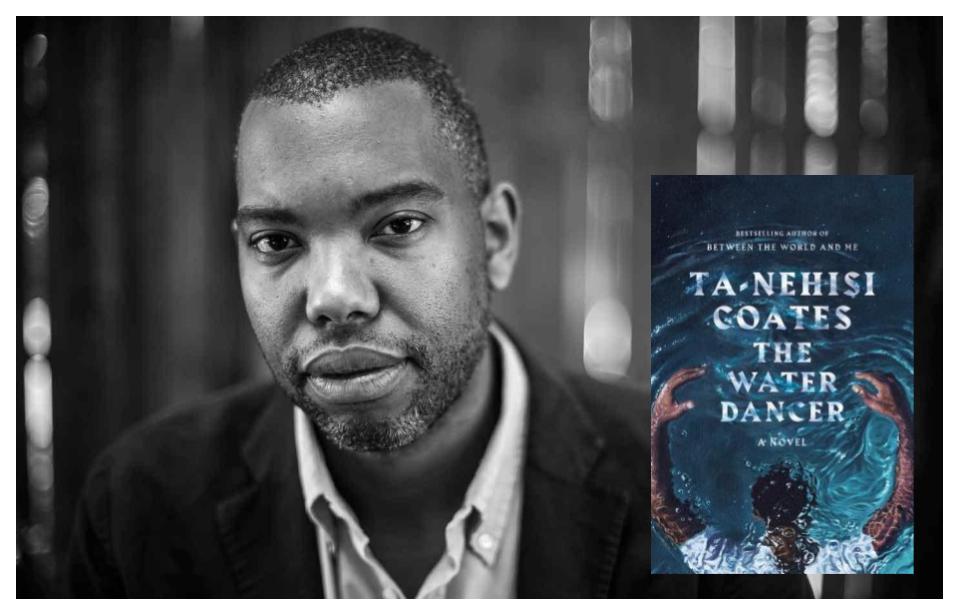 Salon@615: Special Edition is pleased to present Ta-Nehisi Coates, award-winning non-fiction writer, for his highly anticipated debut novel, The Water Dancer. A copy of The Water Dancer is included with every ticket. Please note: there will be no signing opportunity at the conclusion of this event. Tickets are available via this link.

About the book:
The Water Dancer is a boldly imagined work of magic and adventure, love and separation, and the power of resistance. It is the story of America's oldest struggle—the struggle to tell the truth.

Young Hiram Walker was born into bondage—and lost his mother and all memory of her when he was a child. Hiram, who is gifted with a mysterious power, almost drowns when he crashes a carriage into a river, but is saved from the depths by a force he doesn't understand, a blue light that lifts him up and lands him a mile away.

So begins an unexpected journey into the covert war on slavery that takes Hiram from the corrupt grandeur of Virginia’s proud plantations to desperate guerrilla cells in the wilderness, from the coffin of the Deep South to dangerously utopic movements in the North. Even as he’s enlisted in the underground war between slavers and the enslaved, all Hiram wants is to return to the Walker Plantation to free the family he left behind—but to do so, he must first master his magical gift and reconstruct the story of his greatest loss.

About the author:
Ta-Nehisi Coates is the author of The Beautiful Struggle, We Were Eight Years in Power, and Between the World and Me, which won the National Book Award in 2015. He is the recipient of a MacArthur Fellowship. Ta-Nehisi lives in New York City with his wife and son. The Water Dancer is his first novel.

About Salon@615:
Salon@615 is an ongoing partnership between Nashville Public Library, Nashville Public Library Foundation, Parnassus Books, Humanities Tennessee, and BookPage magazine, designed to nurture and celebrate the literary life of Nashville by presenting bestselling authors for talks and book signings. Since its inception in early 2011, Salon@615 has become a regular and vital author series on Nashville’s cultural calendar.

The Water Dancer: A Novel (Hardcover)