END_OF_DOCUMENT_TOKEN_TO_BE_REPLACED

Salon@615 with Hoda Kotb author of Where We Belong 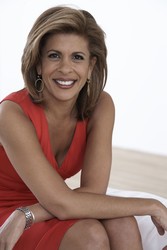 Please join Parnassus Books in welcoming Hoda Kotb for a discussion and signing of her book, Where We Belong: Journeys That Show Us The Way, as part of our Salon@615 series.

This salon is a free, ticketed event. A limited number of auditorium tickets will be available on-site 30 minutes before show time on the event date. Advance auditorium tickets are limited and guarantee a seat in the auditorium. Visit Salon@615.org to buy tickets or for more information. Arrive early for the on-site ticket line. Once auditorium seats have been filled, guests will be accommodated in alternative viewing locations. To join the signing line at this event, you must purchase a copy of the author’s latest book from Parnassus Books. As a Salon patron, you will receive a 10% discount!

About Where We Belong:

In this incredible collection of stories, Hoda Kotb writes about individuals who realized their path in life was either veering off in a completely new direction or was getting too far off course from where they knew they belonged. By following their passions, their gut, and their heart, these people learned how fulfilling life could feel. From the investment banker who became a minister after years of working on Wall Street, to the young woman from a blue-collar background whose passion took her to Harvard Medical School, to the high-powered PR exec who found herself drawn to a pioneering residential community, to a “no-kids” guy who now helps children all over the world, the stories in Where They Belong come from an array of ordinary individuals who have discovered the power of embracing change or fighting for a dream.

Hoda Kotb was named co-anchor of the fourth hour of Today in 2007. She has also been a Dateline NBC correspondent since 1998 and is a New York Times bestselling author for her book, Hoda. The three-time Emmy winner also won the prestigious 2006 Peabody Award, the 2003 Gracie Award, and the 2002 Edward R. Murrow Award. She lives in New York City.

Where We Belong: Journeys That Show Us The Way (Hardcover)