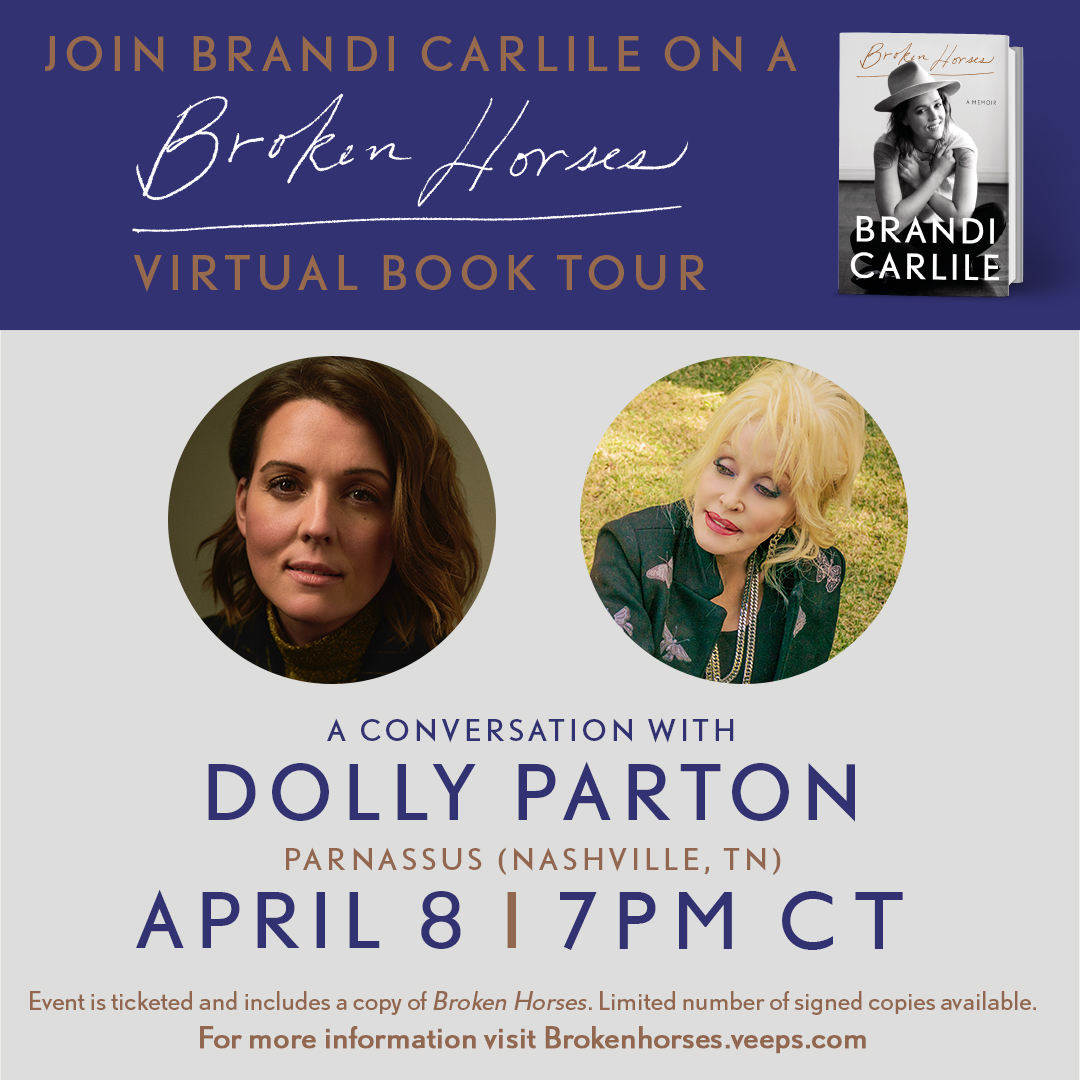 Parnassus Books is thrilled to present a virtual event with Brandi Carlile for her memoir, Broken Horses, in conversation with Dolly Parton.

This is a ticketed event which will be held live on Thursday, April 8th at 7:00 pm CT. All tickets include a copy of Broken Horses. Please note: signed copies have sold out. Click here for more information and to purchase tickets. Books will ship on a rolling basis via USPS Media Mail. We anticipate all orders to arrive on or before May 15th, 2021.

Missed or can't make the event, but still want a chance to watch? After the livestream has ended, the event will remain available for viewing through 9:59 PM CT on April 22 for ticketholders. You can still purchase tickets before April 22nd to receive access to the archived stream + a copy of the book!

The critically acclaimed singer-songwriter, producer, and six-time Grammy winner opens up about a life shaped by music in this candid, heartfelt, and intimate story.

Brandi Carlile was born into a musically gifted, impoverished family on the outskirts of Seattle and grew up in a constant state of change, moving from house to house, trailer to trailer, fourteen times in as many years. Though imperfect in every way, her dysfunctional childhood was as beautiful as it was strange, and as nurturing as it was difficult. At the age of five, Brandi contracted bacterial meningitis, which almost took her life, leaving an indelible mark on her formative years and altering her journey into young adulthood.

As an openly gay teenager, Brandi grappled with the tension between her sexuality and her faith when her pastor publicly refused to baptize her on the day of the ceremony. Shockingly, her small town rallied around Brandi in support and set her on a path to salvation where the rest of the misfits and rejects find it: through twisted, joyful, weird, and wonderful music.

In Broken Horses, Brandi Carlile takes readers through the events of her life that shaped her very raw art--from her start at a local singing competition where she performed Elton John's "Honky Cat" in a bedazzled white polyester suit, to her first break opening for Dave Matthews Band, to many sleepless tours over fifteen years and six studio albums, all while raising two children with her wife, Catherine Shepherd. This hard-won success led her to collaborations with personal heroes like Elton John, Dolly Parton, Mavis Staples, Pearl Jam, Tanya Tucker, and Joni Mitchell, as well as her peers in the supergroup The Highwomen, and ultimately to the Grammy stage, where she converted millions of viewers into instant fans.

Evocative and piercingly honest, Broken Horses is at once an examination of faith through the eyes of a person rejected by the church's basic tenets and a meditation on the moments and lyrics that have shaped the life of a creative mind, a brilliant artist, and a genuine empath on a mission to give back.

Brandi Carlile is a six-time Grammy Award–winning singer, songwriter, performer, and producer. Since her debut in 2004, she has released six studio albums and was the most nominated female artist at the 2019 Grammy Awards, with six nominations, including Album, Record, and Song of the Year. In 2008, Carlile founded the Looking Out Foundation. The Looking Out Foundation amplifies the impact of music by empowering those without a voice, with campaigns focused on children living in war zones, prevention and reduction in incarceration and recidivism, racial justice, violence prevention, food insecurity, and more. To date, the foundation has raised over $2 million for grassroots causes. Beloved by fans, peers, and critics alike, Carlile and her band have performed sold-out concerts across the world. Brandi Carlile lives in rural Washington State on a compound with her bandmates and their families, as well as her wife, Catherine, and their two daughters, Evangeline and Elijah.

Dolly Parton is an internationally renowned superstar who has contributed timeless classics to the world of music entertainment, including "Jolene," "Coat of Many Colors," and the mega-hit "I Will Always Love You." Achieving 25 RIAA-certified gold, platinum, and multi-platinum awards, she has had 26 songs reach #1 on the Billboard country charts, a record for a female artist. She has garnered ten Grammy Awards and 49 nominations, including the Lifetime Achievement Award and a 2020 win with for KING & COUNTRY for their collaboration on God Only Knows; 10 Country Music Association Awards, including Entertainer of the Year; five Academy of Country Music Awards, also including a nod for Entertainer of the Year; four People's Choice Awards; and three American Music Awards. In 1999, Parton was inducted as a member of the coveted Country Music Hall of Fame.