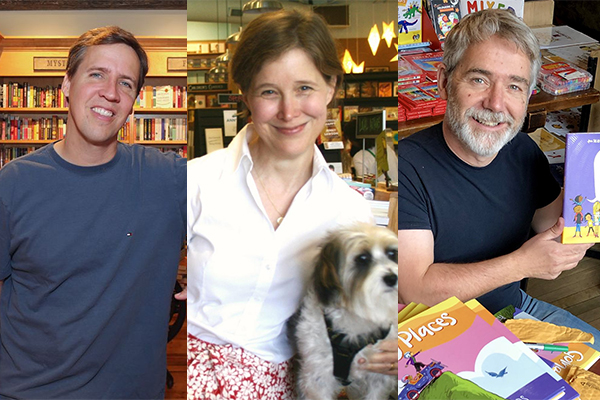 A Conversation to Support the Book Industry Charitable Foundation (Binc) with Independent Bookstore Author/Owners Jeff Kinney (An Unlikely Story), Ann Patchett (Parnassus Books), and Peter Reynolds (Blue Bunny Books). What do bestselling authors Jeff Kinney, Ann Patchett and Peter H. Reynolds have in common? They all own their own independent bookstores! As strong supporters of Indies, these authors not only talk the talk, they walk the walk. Join us for a virtual event with these three to support the work of Binc. Find out what led each of these authors to take a leap of faith and invest in their own bookstores. Learn about how the stores have changed their lives and work. And see how the challenges of the past few months have affected them and their businesses. Register now for this virtual event live on Crowdcast and join in this remarkable conversation.

ABOUT THE AUTHORS:
Author JEFF KINNEY didn’t grow up wanting to be a children’s author. His dream was to become a newspaper cartoonist. When he couldn’t get his comic strip syndicated after college, he started writing down ideas for Diary of a Wimpy Kid. Jeff worked on the book for six years before publishing it online on Funbrain.com in daily installments. In 2006, Jeff signed a multi-book deal with publisher Harry N. Abrams, Inc. to turn Diary of a Wimpy Kid into a print series. The first Diary of a Wimpy Kid book was published in 2007 and became an instant bestseller, remaining on the New York Times bestseller lists since the publication of the first book. Jeff Kinney was named one of Time magazine as one of the 100 Most Influential People in the World.  Jeff lives with his wife and two sons in Massachusetts, where they own a bookstore, An Unlikely Story.

ANN PATCHETT is the author of seven novels, she was the editor of Best American Short Stories, 2006, and has written three books of nonfiction. In 2019, she published her first children’s book, Lambslide, illustrated by Robin Preiss Glasser. Patchett has been the recipient of England’s Orange Prize, the PEN/Faulkner Award, a Guggenheim Fellowship, and numerous other awards. Her books have been both New York Times Notable Books and New York Times bestsellers. In November, 2011, she opened Parnassus Books in Nashville, Tennessee, with her business partner Karen Hayes.  She has since become a spokesperson for independent booksellers and In 2012 she was named by Time magazine as one of the 100 Most Influential People in the World. Ann Patchett lives in Nashville with her husband, Karl VanDevender, and their dog, Sparky.

Blue Bunny Bookstore owner PETER H. REYNOLDS is well known for his best-selling books about protecting and nurturing the creative spirit, including the three books in his “Creatrilogy” --  The Dot, Ish and Sky Color. Since 2009, each September, educators and students have joined International Dot Day, a global celebration of creativity in the classroom, with over 10 million teachers, librarians and students from 143 countries participating to date. His award-winning work also includes illustrating the New York Times best-selling Judy Moody and Stink books, written by Megan McDonald. Peter and his twin brother Paul founded the award-winning children’s media company, FableVision, Inc., in 1996, and later launched the Reynolds Center for Teaching, Learning, and Creativity (RCTLC), a non-profit to encourage creativity and innovation in teaching and learning. Peter has received an honorary Doctorate of Humane Letters from Fitchburg State College, and has won numerous awards including the Distinguished Eagle Award by the Boy Scouts of America for distinguished service in his profession and to his community in 2017. Much of Peter's spare time is spent giving back to the community, supporting schools, and serving on the board of several non-profit organizations.