Author event with Virginia Willis, author of Secrets of the Southern Table 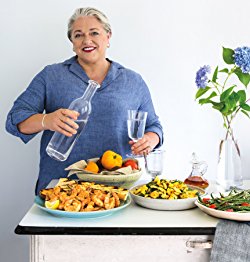 In Secrets of the Southern Table, award-winning chef and cookbook author Virginia Willis takes you on a tour of today's South—a region rich in history and cultural diversity. With her signature charm and wit, Virginia shares many well-known Southern recipes like Pimento Cheese Tomato Herb Pie and "Cathead" Biscuits, but also some surprising revelations drawn from the area's many global influences, like Catfish Tacos with Avocado Crema, Mississippi-Style Char Siu Pork Tenderloin, and Greek Okra and Tomatoes. In addition to the recipes, Virginia profiles some of the diverse chefs, farmers, and other culinary influencers who are shaping contemporary Southern cuisine. Together, these stories and the delicious recipes that accompany them celebrate the rich and ever-evolving heritage of Southern cooking.

Georgia-born French-trained Chef Virginia Willis has made chocolate chip cookies with Dwanye “The Rock” Johnson, foraged for berries in the Alaskan wilderness, harvested capers in the shadow of a smoldering volcano in Sicily, and beguiled celebrities such as Jane Fonda, Morgan Freeman, and Aretha Franklin with her cooking -- but it all started in her grandmother’s country kitchen.

Virginia is the author of Secrets of the Southern Table: A Food Lover’s Tour of the Global South, Lighten Up, Y’all, Bon Appétit, Y’all, Basic to Brilliant, Y’all, Okra, and Grits. Lighten Up, Y’all: Classic Southern Recipes Made Healthy and Wholesome received a 2016 James Beard Foundation Award of Excellence. She is the former TV kitchen director for Martha Stewart Living, Bobby Flay, and Nathalie Dupree; worked in Michelin-starred restaurants; and traveled the world producing food stories – from making cheese in California to escargot farming in France. She has appeared on Food Network's Chopped, Fox Family and Friends, Martha Stewart Living, and as a judge on Throwdown with Bobby Flay. She is author of the popular column “Cooking with Virginia” for Southern Kitchen and Editor at Large for Southern Living. The Chicago Tribune praised her as one of "Seven Food Writers You Need to Know." Her legion of fans loves her down-to-earth attitude and approachable spirit.

Secrets of the Southern Table: A Food Lover's Tour of the Global South (Hardcover)