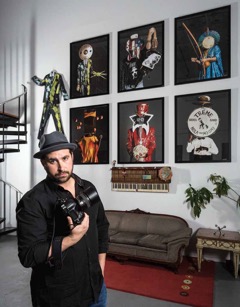 Acclaimed music photographer and Nashville resident Michael Weintrob will discuss his award-winning, newly released book, INSTRUMENTHEAD, at Parnassus. This exciting program will feature a panel discussion moderated by award-winning Nashville writer Craig Havighurst, including Weintrob and local musicians who appear in the book, Jeff Coffin, Dave Pomeroy and others, who will also perform their music at the event.

Released by Magnet Bound Press, the INSTRUMENTHEAD book is a surrealist look into the soul of a musician, not through the eyes as with traditional portraiture, but through his or her instrument. To learn more about the evolution of the project, watch:

It began in April of 2000, through a candid moment in a photoshoot with the Derek Trucks Band, which sparked an unprecedented art project, bringing together more than 500 musicians from across the globe over the course of nearly two decades. As a superior quality fine art book, INSTRUMENTHEAD is the culmination of this visionary project.

Honored in April 2017 with the Independent Publisher Book Award (IPPY) for Most Outstanding Design, the hardcover book was printed in Italy on three different types of fine art paper by Grafiche Antiga. Measuring 11” x 15”, the full-color book shows musicians as you’ve never seen them before, and conveys “where their heads are really at.”  The book is offered with three different cover options, featuring 369 different INSTRUMENTHEAD artist portraits.

Michael Weintrob has been shooting artist portraits and live music professionally since 1998. His work has appeared in Rolling Stone, Spin, Mojo, Billboard, Relix, Downbeat and Jazz Times, among other publications.

Weintrob’s eclectic collection ranges from mainstream to cult musicians and spans numerous genres. The INSTRUMENTHEAD series has been featured on NPR’s “The Checkout,” in Popular Photography Magazine, in Nashville Arts Magazine, and Luxxe Immo Fine Art Magazine. INSTRUMENTHEAD has been shown at Bonnaroo Music and Arts Festival; North Sea Jazz Festival; the Country Music Hall of Fame and Museum; Gathering of the Vibes; the New Orleans Jazz and Heritage Festival; Big Ears Festival and countless other venues, events, and galleries.