Author event with Jason Reynolds, author of Sunny, For Every One, and Long Way Down 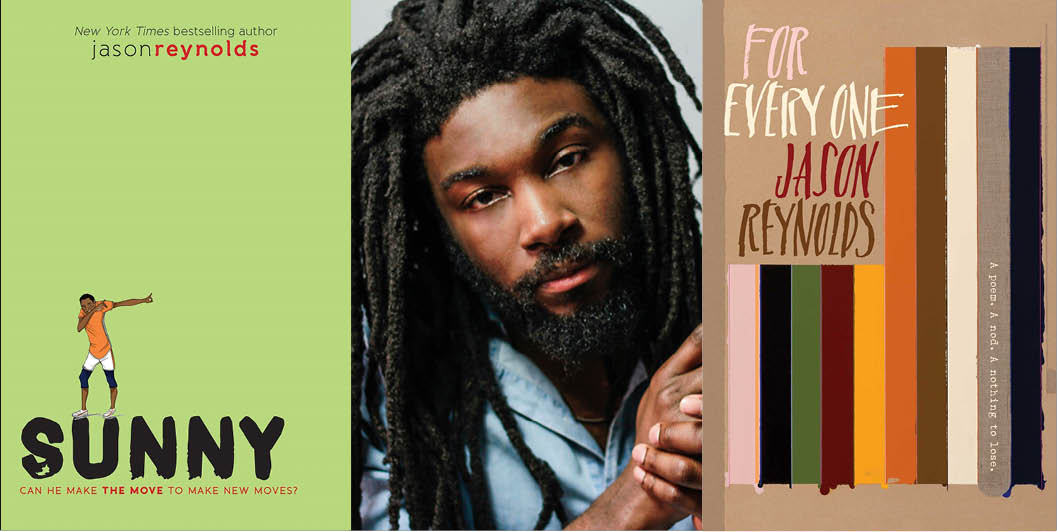 Parnassus Books is thrilled to welcome award-winning and bestselling author Jason Reynolds for a celebration of the release of his two new books, Sunny and For Every One. Read on for more information about the event, each book, and Jason!

This event is free and open to the public. To join the signing line and have books signed by the author at this event, you must purchase a copy of either Sunny or For Every One from Parnassus Books, either in-store, over the phone, or online (scroll down). Both books will be published on Tuesday, April 10. Your book purchase will include a ticket that will admit you into the signing line at the event. By purchasing a book from Parnassus, you are not only supporting a locally owned, independent business, but you are also showing publishers that they should continue sending authors to Parnassus. Beginning with our 2018 events, Parnassus event attendees may collect 10 eligible signing line tickets and redeem them at Parnassus for a coupon and a free tote bag.

In the third novel in the critically acclaimed Track series from National Book Award finalist Jason Reynolds, Sunny tries to shine despite his troubled past.

Ghost. Patina. Sunny. Lu. Four kids from wildly different backgrounds, with personalities that are explosive when they clash. But they are also four kids chosen for an elite middle school track team--a team that could qualify them for the Junior Olympics. They all have a lot of lose, but they all have a lot to prove, not only to each other, but to themselves. Sunny is the main character in this novel, the third of four books in Jason Reynold's electrifying middle grade series.

Sunny is just that--sunny. Always ready with a goofy smile and something nice to say, Sunny is the chillest dude on the Defenders team. But Sunny's life hasn't always been sun beamy-bright. You see, Sunny is a murderer. Or at least he thinks of himself that way. His mother died giving birth to him, and based on how Sunny's dad treats him--ignoring him, making Sunny call him Darryl, never "Dad"--it's no wonder Sunny thinks he's to blame. It seems the only thing Sunny can do right in his dad's eyes is win first place ribbons running the mile, just like his mom did. But Sunny doesn't like running, never has. So he stops. Right in the middle of a race.

With his relationship with his dad now worse than ever, the last thing Sunny wants to do is leave the other newbies--his only friends--behind. But you can't be on a track team and not run. So Coach asks Sunny what he wants to do. Sunny's answer? Dance. Yes, dance. But you also can't be on a track team and dance. Then, in a stroke of genius only Jason Reynolds can conceive, Sunny discovers a track event that encompasses the hard hits of hip-hop, the precision of ballet, and the showmanship of dance as a whole: the discus throw. As Sunny practices the discus, learning when to let go at just the right time, he'll let go of everything that's been eating him up inside, perhaps just in time.

More about For Every One

Originally performed at the Kennedy Center for the unveiling of the Martin Luther King Jr. Memorial, and later as a tribute to Walter Dean Myers, this stirring and inspirational poem is New York Times bestselling author and National Book Award finalist Jason Reynolds's rallying cry to the dreamers of the world.

For Every One is just that: for every one. For every one person. For every one dream. But especially for every one kid. The kids who dream of being better than they are. Kids who dream of doing more than they almost dare to dream. Kids who are like Jason Reynolds, a self-professed dreamer. Jason does not claim to know how to make dreams come true; he has, in fact, been fighting on the front line of his own battle to make his own dreams a reality. He expected to make it when he was sixteen. Then eighteen. Then twenty-five. Now, some of those expectations have been realized. But others, the most important ones, lay ahead, and a lot of them involve kids, how to inspire them. All the kids who are scared to dream, or don't know how to dream, or don't dare to dream because they've NEVER seen a dream come true. Jason wants kids to know that dreams take time. They involve countless struggles. But no matter how many times a dreamer gets beat down, the drive and the passion and the hope never fully extinguish--because just having the dream is the start you need, or you won't get anywhere anyway, and that is when you have to take a leap of faith.

Jason Reynolds is a New York Times bestselling author, a Newbery Award Honoree, a Printz Award Honoree, National Book Award Honoree, a Kirkus Award winner, a two time Walter Dean Myers Award winner, an NAACP Image Award Winner, and the recipient of multiple Coretta Scott King honors. Reynolds was the American Booksellers Association's 2017 spokesperson for Indies First, and will serve as the national spokesperson for the 2018 celebration of School Library Month in April 2018, sponsored by the American Association of School Librarians. Jason's many works of fiction include When I Was the Greatest, Boy in the Black Suit, All American Boys (cowritten with Brendan Kiely), As Brave As You, For Every One, the Track series (Ghost, Patina, Sunny, and Lu), and Long Way Down, which received both a Newbery Honor and a Printz Honor. He lives in Washington, DC.

For Every One (Hardcover)