Author event with Gregory Boyle, author of Barking to the Choir 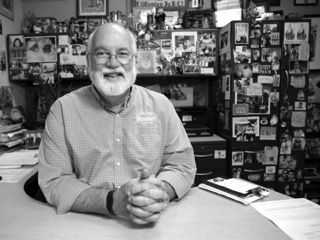 In his first book, Tattoos on the Heart: The Power of Boundless Compassion, Gregory Boyle introduced us to Homeboy Industries, the largest gang intervention, rehabilitation, and re-entry program in the world, founded in 1988 to address the unmet needs of gang-involved youth in Boyle’s Los Angeles parish neighborhood.

As Homeboy Industries approaches its 30th Anniversary, Boyle shares what three decades of working with gang members in Los Angeles has taught him—and what he hopes it can teach readers—about faith, compassion, and the enduring power of human connection in Barking to the Choir: The Power of Radical Kinship.

Written with the gentle and humorous tone that Boyle is known for among the thousands of homies and people who hear him speak each year, his second book offers a window on a world defined by more compassion and fewer barriers. Just as Tattoos on the Heart left readers awestruck, Barking to the Choir is guaranteed to do the same. Set amidst a marginalized population plagued by poverty and violence, and against a nation deeply divided, the stories and parables in Barking to the Choir serve as a testament to the power of unconditional love in difficult times.

Gregory Boyle is an American Jesuit priest and the founder of Homeboy Industries in Los Angeles, the largest gang-intervention, rehabilitation, and re-entry program in the world, founded in 1988. He has received the California Peace Prize and been inducted into the California Hall of Fame. In 2014, the White House named Boyle a Champion of Change. He received the University of Notre Dame’s 2017 Laetare Medal, the oldest honor given to American Catholics. He is the acclaimed author of Tattoos on the Heart (2010). Barking to the Choir is his second book, and he will be donating all net proceeds to Homeboy Industries.

Barking to the Choir: The Power of Radical Kinship (Hardcover)