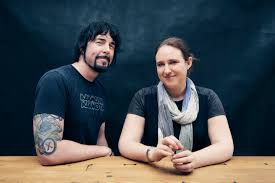 Parnassus Books is thrilled to host Amie Kaufman and Jay Kristoff in discussion with Victoria Schwab about their new book, Gemina.

This event is free and open to the public. To get a book signed at the event, we ask that you please purchase a book from Parnassus Books. By purchasing a book from Parnassus, you are not only supporting a locally owned, independent business, but you are also showing publishers that they should continue sending authors to Parnassus. Think about it this way: You wouldn't bring your own biscuits to the Loveless Cafe, would you?

Moving to a space station at the edge of the galaxy was always going to be the death of Hanna’s social life. Nobody said it might actually get her killed.

Hanna Donnelly is the station captain’s pampered daughter; Nik Malikov the reluctant member of a notorious crime family. But while the pair are struggling with the realities of life aboard the galaxy’s most boring space station, little do they know that Kady Grant and the Hypatia are headed right toward Heimdall, carrying news of the Kerenza invasion.

When an elite BeiTech strike team invades the station, Hanna and Nik are thrown together to defend their home. But alien predators are picking off the station residents one by one, and a malfunction in the station’s wormhole means the space-time continuum might be ripped in two before dinner. Soon Hanna and Nik aren’t just fighting for their own surivival; the fate of everyone on the Hypatia—and possibly the known universe—is in their hands.

But relax. They’ve totally got this. They hope.

Amie Kaufman is a New York Times and internationally bestselling author of young adult fiction. Her multi-award winning work has been published in 24 countries, and described as “a game-changer” (Shelf Awareness), “stylistically mesmerising” (Publishers Weekly) and “out-of-this-world awesome” (Kirkus). The Starbound trilogy, co-authored with Meagan Spooner, began with These Broken Stars. Her latest series, co-authored with Jay Kristoff, began in 2015 with the international bestseller Illuminae. Raised in Australia and Ireland, Amie has degrees in history, literature, law and conflict resolution. She lives in Melbourne with her husband, their rescue dog, and an extremely large personal library.

Jay Kristoff is a New York Times and international bestselling author of science fiction and fantasy. He grew up in the second most isolated capital city on earth and fled at his earliest convenience, although he’s been known to trek back for weddings of the particularly nice and funerals of the particularly wealthy. He spent most of his formative years locked in his bedroom with piles of books, or gathered around dimly-lit tables rolling polyhedral dice. Being the holder of an Arts degree, he has no education to speak of. Jay is 6’7 and has approximately 13,030 days to live. He abides in Melbourne with his secret agent kung-fu assassin wife, and the world’s laziest Jack Russell.

Victoria Schwab is the product of a British mother, a Beverly Hills father, and a southern upbringing. Because of this, she has been known to say “tom-ah-toes”, “like”, and “y’all”.  She writes books. Some are about monsters. Others, supervillains. Others, magic. When she’s not wandering Scottish streets, she’s usually holed away with a cup of tea.