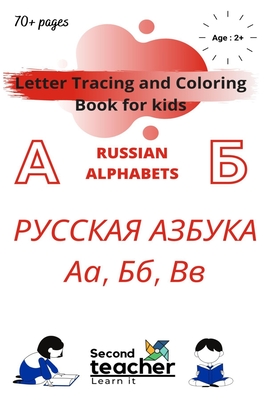 The language is a basic characteristic which constitutes one's own representation of who you are and what you know.

What is one of the first things to learn when you study a foreign language?

The alphabet, of course.

You may feel that using English as a common language, it won't matter whether your children learn Russian or not.

It happens that your child might just stop speaking Russian, leading to identity change. Since a child's Russian language skills are lacking, they will not be able to interact well in Russian as they do in English.

Learning Russian alphabet pronunciation includes both the names of the letters and sounds. It is your first step in the path to speak the Russian language.

How can parents support their child's learning process? Here the solution is This book enables your kids to practice and learn letters, words in an interesting way.

For each alphabet letter there will be a page.

- 1st page has an outline of a letter with the image that starting with that letter, name in Russian, English with the phonics of Russian name and image.

- The children can color the letter and images that are allocated for each letter.

- 2nd page is for next alphabet.

- This book has similar setup for all the alphabets till page number 35.

- Pages 36-51 contains all alphabets in single pages with space for practice.

- 51-70 is having box spaces to practice Russian alphabet further.

That looks like a great start right Hope your kids will learn something useful in the meantime.

Let us gift meaningful book as a gift to our kids.

⚠ If you loved ♥ the book, we request you to take a moment to review it (★★★★★). It helps in further progression for our future works.

Thanks for your support