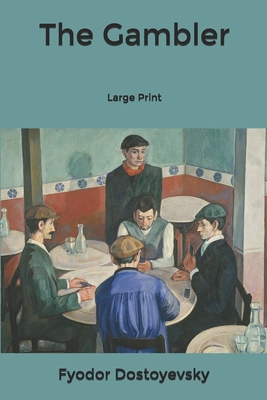 
Special Order - Usually Arrives in 1-5 Days
- This book cannot be returned
The first-person narrative is told from the point of view of Alexei Ivanovich, a tutor working for a Russian family living in a suite at a German hotel. The patriarch of the family, The General, is indebted to the Frenchman de Griers and has mortgaged his property in Russia to pay only a small amount of his debt. Upon learning of the illness of his wealthy aunt, "Grandmother", he sends streams of telegrams to Moscow and awaits the news of her demise. His expected inheritance will pay his debts and gain Mademoiselle Blanche de Cominges's hand in marriage.Alexei is hopelessly in love with Polina, the General's niece. She asks him to go to the town's casino and place a bet for her. After hesitations, he succumbs and ends up winning at the roulette table. He returns to her the winnings but she will not tell him the reason she needs money. She only laughs in his face (as she does when he professes his love) and treats him with cold indifference, if not downright malice. He only learns the details of the General's and Polina's financial state later in the story through his long-time acquaintance, Mr. Astley. Astley is a shy Englishman who seems to share Alexei's fondness of Polina. He comes from English nobility and has a good deal of money.