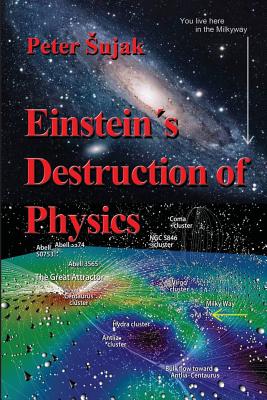 By Peter Sujak
$25.00
Usually Ships in 1-5 Days
This book cannot be returned

This book is intended for anyone who is interested in a real physical image and order of the physical world surrounding us. It represents a concise summary of the abolishment of principles of formal logic in relativity and quantum mechanics.

Einstein's destruction of physics and scientific principles is documented here. The real substance of gravity and inertial forces is debunked. The substance of mass is recovered and the nature of time in physics is revealed. The reality of the double-slit experiment is revealed. The physical reality of mysteries of space, time, frequencies, wavelengths and wave functions in Relativity and Quantum mechanics is exposed. It shows that Quarks and Higgs bosons do not exist.

I document that, for the past four hundred years, there is no distinguished physicist who would not have recognized that without existence of the ether it is not possible to explain the physical world around us. It show that Einstein, after 1916, came in with his rediscovery of the ether and he subsequently became a more enthusiastic advocate of the proven existence of the ether than supporters of the ether before 1905.

The book explains that all elementary particles, all rigid matter and all force fields in the Universe are created from compression of ether. Filling the space of the Universe with swirling ether is all that is required for the self-evolution of the Universe.

My book provides an overview of the opposition of physicists against the mainstream physical image of the world over the past hundred years. It documents the basic historical, philosophical and physical reasons for denial of the main physical theories of the 20th century.

The aim of my book is to return physics from its way of metaphysics in the 20th century on the way of the physical reality in the 21st century. The book is the result of 10 years intense research work in the ground physical platform of contemporary fundamental physics.