111 Places in Houston That You Must Not Miss (Paperback) 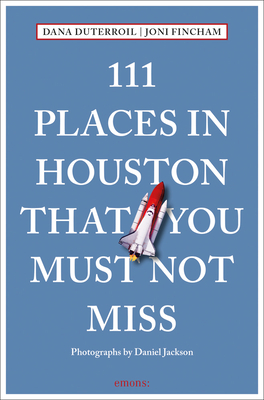 111 Places in Houston That You Must Not Miss (Paperback)


Availability to be confirmed
- The ultimate insider's guide to Houston- Features fascinating and unusual places not found in traditional travel guides- Part of the international 111 Places/111 Shops series with over 250 titles and 1.5 million copies in print worldwide- Appeals to both the local market (more than 2 million people call Houston home) and the tourist market (more than 22 million people visit Houston every year ) - Fully illustrated with 111 full-page color photographsSpace City. Bayou City. Hustletown. Clutch City. Crush City. What's the story behind all these nicknames? 111 Places in Houston That You Must Not Miss is your guide to the hidden stories behind the city's monikers, stereotypes, and statistics. As America's most diverse city, this book provides 111 different ways to explore Htown. This illustrated guidebook is a readable tour of places representing the distinct personalities that make up the population of the nation's fourth largest city. Traverse Houston's massive landscape of strip malls and interstates, and you will find a city that not only embraces diversity, but transforms it into its own culture, where Hindu temples take up office space, an enterprising Vietnamese jeweler supplies the hip hop scene with bling, and one man's mission to cover his house in beer cans is now a museum. Whether you're a native Houstonian or a newcomer, this book serves as both a good read and a resource for getting to know the city - one unique place at a time.
Dana DuTerroil grew up in Houston during the AstroWorld era and returned in 2008 to the nation's most diverse city, where she enjoys hunting for bling on Harwin Drive and pretending the Menil Collection is her second home. She is a writer, lawyer, roller derby retiree, and co-owner of Trip Chandler, a team of two woman who give tours of Houston to visitors and locals. Houston's kolaches, icehouses, and shady live oaks convinced Joni Fincham to adopt the city as her hometown after living in Kansas, New Orleans, North Carolina, France, and Scotland. As co-owner of Trip Chandler, she helps visitors, new arrivals, and locals discover their own favorite pieces in Houston.