The Problems of Philosophy: a 1912 book by the philosopher Bertrand Russell, in which the author attempts to create a brief and accessible guide t (Paperback) 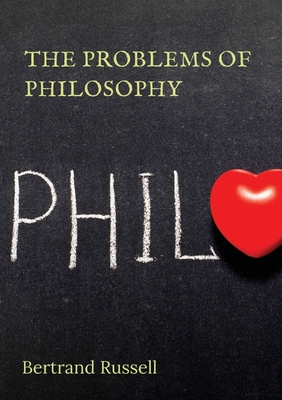 The Problems of Philosophy: a 1912 book by the philosopher Bertrand Russell, in which the author attempts to create a brief and accessible guide t (Paperback)

The Problems of Philosophy By Bertrand Russell

The Problems of Philosophy is a 1912 book by the philosopher Bertrand Russell, in which the author attempts to create a brief and accessible guide to the problems of philosophy. Focusing on problems he believes will provoke positive and constructive discussion, Russell concentrates on knowledge rather than metaphysics: If it is uncertain that external objects exist, how can we then have knowledge of them but by probability. There is no reason to doubt the existence of external objects simply because of sense data.Russell guides the reader through his famous 1910 distinction between knowledge by acquaintance and knowledge by description and introduces important theories of Plato, Aristotle, Ren Descartes, David Hume, John Locke, Immanuel Kant, Georg Wilhelm Friedrich Hegel and others to lay the foundation for philosophical inquiry by general readers and scholars alike.In the following pages I have confined myself in the main to those problems of philosophy in regard to which I thought it possible to say something positive and constructive, since merely negative criticism seemed out of place. For this reason, theory of knowledge occupies a larger space than metaphysics in the present volume, and some topics much discussed by philosophers are treated very briefly, if at all.Is there any knowledge in the world which is so certain that no reasonable man could doubt it? This question, which at first sight might not seem difficult, is really one of the most difficult that can be asked. When we have realized the obstacles in the way of a straightforward and confident answer, we shall be well launched on the study of philosophy-for philosophy is merely the attempt to answer such ultimate questions, not carelessly and dogmatically, as we do in ordinary life and even in the sciences, but critically, after exploring all that makes such questions puzzling, and after realizing all the vagueness and confusion that underlie our ordinary ideas. In daily life, we assume as certain many things which, on a closer scrutiny, are found to be so full of apparent contradictions that only a great amount of thought enables us to know what it is that we really may believe. In the search for certainty, it is natural to begin with our present experiences, and in some sense, no doubt, knowledge is to be derived from them. But any statement as to what it is that our immediate experiences make us know is very likely to be wrong. It seems to me that I am now sitting in a chair, at a table of a certain shape, on which I see sheets of paper with writing or print. By turning my head I see out of the window buildings and clouds and the sun. I believe that the sun is about ninety-three million miles from the earth that it is a hot globe many times bigger than the earth that, owing to the earth's rotation, it rises every morning, and will continue to do so for an indefinite time in the future.