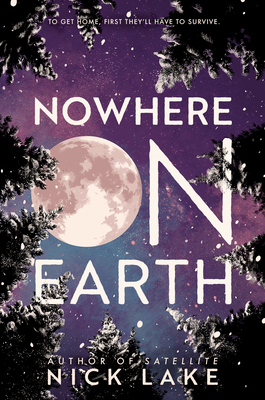 What begins with a plane crash in the mountains of Alaska becomes a survival story with a heartfelt core and a scifi spin. Stranded in the woods with only her little brother and an injured pilot, Emily must use everything she knows to keep them all alive in the face of freezing temperatures, hungry bears, and the mysterious gunmen hunting them. This story about protecting what you love is equal parts tender and thrilling.

— Kay
From the Printz Award-winning author of Satellite comes a compelling new novel about a girl who must brave the elements to help a lost child with an otherworldly secret.

Sixteen-year-old Emily is on the run. Between her parents and the trouble she's recently gotten into at school, she has more than enough reason to get away. But when she finds a little boy named Aidan wandering in the woods, she knows she needs to help him find his way home. But getting home is no easy matter, especially when Emily finds out that Aidan isn't even from Earth. When their plane crashes into the side of a snowy mountain, it's up to Emily to ensure Aidan and their pilot, Bob, make it off the mountain alive. Pursued by government forces who want to capture Aidan, the unlikely team of three trek across the freezing landscape, learning more about each other, and about life, than they ever thought possible.

"I love Nick Lake's writing. I would read anything he wrote--grocery list, email, etc.--because his writing, always, is so real and brave. He takes on subjects other writers might avoid, and he writes the hell out of them." --New York Times bestselling author Jennifer Niven on Nick Lake
Nick Lake is the Michael L. Printz Award winner for In Darkness. His novel Hostage Three received three starred reviews and was named a Publishers Weekly, School Library Journal, and Boston Globe Best Book of the Year. Nick is also the publishing director for fiction at HarperCollins Children's Books UK. Follow him on Twitter at @nicklakeauthor.
“An interesting exploration of individuality, family and how they often conflict. . . . Exhilarating YA science fiction.” —Shelf Awareness, starred review

"Starts off as an appealing survival story, then moves into an exploration of family and relationships, while maintaining its pace." —School Library Journal

"The book opens with the plane crash and the pace never slows. . . . For all the action and thrills, though, there is a strong emotional center here." —The Bulletin

“The overall message about connecting and empathy is deeply felt, as is Emily's coming-of-age and understanding of her place in the universe as a young woman with her own voice.” —Kirkus Reviews

“Deftly weaving elements of science fiction into a tale of survival and personal (re)growth, Lake takes on sexual assault, family discord, and what it means to rebuild in the face of trauma. Both completely alien and yet all-too-relatable, Emily and Aidan's story will help readers think more deeply about the world around them.” —Booklist