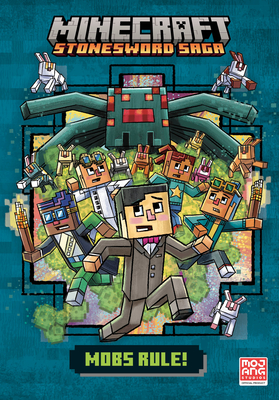 
On Our Shelves Now
Get ready to find danger, adventure—and maybe even a few laughs—in this deluxe illustrated hardcover chapter book, the only official Minecraft chapter book series!


Based on the most popular video game of all time, this all-new chapter book series takes a group of intrepid Minecraft players deeper into the game than ever before. Something has turned the Evoker King to stone, and elements of his code have turned into new and terrible bosses that threaten the digital world of Minecraft. Now Po, Harper, and their friends must travel deep into underground and into a web of danger to face the one of them. But that's the easy part, because in the real world, Po decides to run for class president and before he knows it, the ground feels like it is opening under his feet and his popularity is about to plummet!

© 2022 Mojang AB. Minecraft, the MINECRAFT logo and the MOJANG STUDIOS logo are trademarks of Microsoft Corporation
Established in July 2013 in a merger between Penguin and Random House, Penguin Random House, with nearly 250 independent imprints and brands on five continents, more than 15,000 new titles published each year, and close to 800 million print, audio, and eBooks sold annually, is the world’s leading trade book publisher. Like its predecessor companies, Penguin Random House is committed to publishing adult and children’s fiction and nonfiction print editions and is a pioneer in digital publishing. Its publishing lists include more than 60 Nobel Prize laureates and hundreds of the world’s most widely read authors.