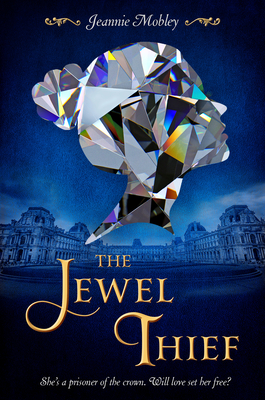 When her father, the King’s crown jeweler, sinks into depression, Juliette takes on the task of cutting the stone. Intrigue and romance in 17th century Paris. Based on the story of the Hope Diamond.

— Rae Ann
A lush, slow-burn romance set in 17th century France, and based on the history of the Hope Diamond--The Glittering Court meets Alex and Eliza.

Her story begins . . . in Paris. The only daughter of the King's crown jeweler, Juliette marvels at the large, deep-blue diamond Louis XIV has commanded her father to make shine like the sun. But Jean Pitau has never cut a diamond quite like this, and shaping it is a risky endeavor. As Jean spirals into depression, Juliette takes it upon herself to cut the stone, and with every misstep, brings her family closer to ruin.

Her story resumes . . . in a cold, dark cell of the Bastille prison. Charged with stealing the King's diamond, Juliette has but one chance to convince him that her motives were pure. If she fails, this night may very well be her last. Though, death wouldn't be her worst fate. Because recording Juliette's confession is René, a court-appointed scribe, and the man she loves. But René holds his own grudge against Juliette, and this is her one and only chance to win back his heart.
Jeannie has spent much of her life daydreaming herself into other centuries. This tendency has led her to multiple degrees in history and anthropology, and a passion for writing fiction. She is the author of three historical middle grade novels (Katerina's Wish (2012, McElderry), Searching for Silverheels (2014, McElderry), and Bobby Lee Claremont and the Criminal Element (2017, Holiday House), which have received starred reviews from Booklist, Kirkus Reviews, Publishers Weekly, and Library Media Connection. Other honors include the Willa Award, Colorado Book Award, Junior Library Guild Selection, and inclusion on numbers notable lists, including the Amelia Bloomer List for Feminist Literature, Library of Congress 52 Great Reads List, the New York Public Library Notables, the Jefferson Cup List for Historical Fiction, as well as a variety of state lists. Her favorite stories are those of ordinary people who achieve the extraordinary. She is currently a professor of anthropology and department chair at a college in northern Colorado.
Praise for The Jewel Thief

"Mobley crafts her own Hope Diamond legend, one filled with romance and intrigue . . .  Mobley's account of diamond cutting is fascinating, and her attention to the political and social tensions of the time, particularly the treatment of Jews in 17th-century France, adds a pointed layer of consequence to the novel."--Publishers Weekly

"Mobley skillfully combines real events and people with a fictional teen protagonist forced to make her thief's confession to her horrified true love. The romance inherent in diamonds and royalty is enhanced by the young lovers' story, and is also augmented by a (multicultural) plot thread involving the Jewish jewelers, who were notoriously badly treated in Europe at that time (the 1600s)."--Booklist

"The mystery at the heart of this book maneuvers deftly between the intrigue and deception of the Sun King's court, an aching romance, and the lengths we will go for those we love. I couldn't put it down!"--Andrea Robertson, New York Times bestselling author

"Set among the splendors and intrigues of the Baroque court, The Jewel Thief is a gripping tale of a bold young craftswoman determined to carve out her own glorious destiny."--Elizabeth Bunce, Morris Award-winning author of A Curse Dark as Gold