The Road from Raqqa: A Story of Brotherhood, Borders, and Belonging (Hardcover) 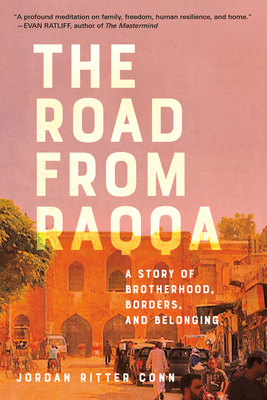 By Jordan Ritter Conn
$28.00
On Our Shelves Now

Riyad Alkasem (owner of Café Rakka, one of the best restaurants near Nashville: fact, not opinion) left Syria for opportunities in the U.S. while his brother, Bashar, stayed to raise a family in their ancestral town, even as revolution devolved into chaos. Both encounter staggering struggles, as well as the strength of family and the kindness of strangers. Absorbing and transporting, this is a heartfelt page-turner about bonds that span distance and time.

Crossing years and continents, the harrowing story of the road to reunion for two Syrian brothers who—despite a homeland at war and an ocean between them—hold fast to the bonds of family.

“The Road from Raqqa had me gripped from the first page. I couldn’t put it down.”—Christy Lefteri, author of The Beekeeper of Aleppo

The Alkasem brothers, Riyad and Bashar, spend their childhood in Raqqa, the Syrian city that would later become the capital of ISIS. As a teenager in the 1980s, Riyad witnesses the devastating aftermath of the Hama massacre—an atrocity that the Hafez al-Assad regime commits upon its people. Wanting to expand his notion of government and justice, Riyad moves to the United States to study law, but his plans are derailed and he eventually falls in love with a Southern belle. They move to a suburb of Nashville, Tennessee, where they raise two sons and where Riyad opens a restaurant—Café Rakka—cooking the food his grandmother used to make. But he finds himself confronted with the darker side of American freedoms: the hardscrabble life of a newly arrived immigrant, enduring bigotry, poverty, and loneliness. Years pass, and at the height of Syria’s civil war, fearing for his family’s safety halfway across the world, he risks his own life by making a dangerous trip back to Raqqa.

Bashar, meanwhile, in Syria. After his older brother moves to America, Bashar embarks on a brilliant legal career under the same corrupt Assad government that Riyad despises. Reluctant to abandon his comfortable (albeit conflicted) life, he fails to perceive the threat of ISIS until it’s nearly too late.

The Road from Raqqa brings us into the lives of two brothers bound by their love for each other and for the war-ravaged city they call home. It’s about a family caught in the middle of the most significant global events of the new millennium, America’s fraught but hopeful relationship to its own immigrants, and the toll of dictatorship and war on everyday families. It’s a book that captures all the desperation, tenacity, and hope that come with the revelation that we can find home in one another when the lands of our forefathers fail us.

Jordan Ritter Conn is a staff writer for The Ringer. He previously worked at Grantland and ESPN: The Magazine, and he has written for The New York Times and Sports Illustrated. He is a two-time finalist for the Livingston Award, and his work has been cited or recognized by The New Yorker, The Atlantic, The New York Times, The Wall Street Journal, and Slate.

“Jordan Ritter Conn’s riveting debut book, The Road from Raqqa, is a well-wrought portrait of two brothers, Riyad and Bashar Alkasem, and their journeys out of Syria. . . . The book portrays Syria and the United States as multifaceted and complex, both capable of generosity and oppression, with histories as interconnected as the brothers’ own. . . . As complicated and ever-shifting as their views of Syria and the United States are, the brothers’ affection for Raqqa is unwavering. Conn translates their memories into a resplendent love letter to an obliterated city.”—The New York Times

“The Road from Raqqa had me gripped from the first page. I couldn’t put it down. It taught me a lot about a troubled political system that has led to one of the worst humanitarian crises of our times. But it is also about love and family, about tradition and new horizons and the deep complexities of our own fears and hopes.”—Christy Lefteri, author of The Beekeeper of Aleppo

“A work of dazzling emotional power—a gorgeously written exploration of how we cope with seismic loss and how we muster the strength to build again . . . You will come away from this book in awe of its characters’ resilience, as well as grateful for Jordan Ritter Conn’s loving devotion to the art of journalism.”—Brendan I. Koerner, author of The Skies Belong to Us

“Jordan Ritter Conn has constructed an achingly beautiful story that, by some miracle, takes in the epic sweep of the modern Middle East, the continuous whiplash of immigrant life in America, and the depths of brotherly love.”—Steve Fainaru, author of League of Denial

“Stunning . . . Jordan Ritter Conn has taken a true story, in some ways so simple—two brothers taking different paths in a world shattered by politics and war—and layered within it a profound meditation on family, freedom, human resilience, and home.”—Evan Ratliff, author of The Mastermind

“Jordan Ritter Conn writes with a novelist’s grace, giving us both sides of the family’s epic migration story as the brothers find themselves on opposing sides of global conflict and keep trying to find each other again and again, despite the way the world pulls them in different directions. I couldn’t put it down.”—Helen Thorpe, author of The Newcomers

“A poignant debut . . . Fluidly written and emotionally powerful, this page-turner reveals the human cost of war, terrorism, xenophobia, and anti-immigration rhetoric. Readers will find despair and hope in this moving account.”—Publishers Weekly

“Syrian brothers take different paths of immigration, neither easy, in this thoughtful account. . . . [Jordan Ritter] Conn’s affecting narrative touches deeply not just on these contrasting immigration issues . . . but also on how the bonds of family and old community can exist even when people are uprooted.”—Kirkus Reviews

“The parallel stories of the brothers’ lives are informative and deeply moving. The emotional narrative of their Syrian home will help people better understand why people choose to leave and why others stay.”—Library Journal