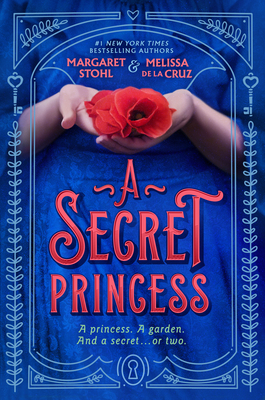 A Little Princess + The Secret Garden = A Secret Princess. Best friends Mary, Cedric, and Sara leave their boarding school and run away to Cedric’s estate after Sara is left orphaned and penniless. A getaway. A garden. Classic characters and stories collide!

— Ashby
A surprising and romantic YA retelling-mashup of A Little Princess and The Secret Garden by bestselling authors Margaret Stohl and Melissa de la Cruz.

Best friends Mary Lennox, Sara Crewe, and Cedric Erroll are best friends. And thank goodness, since their boarding school is basically insufferable. When one of the friends suffers a personal tragedy, a plan—and a secret—change everything for the trio . . . for good.

Filled with charm and romance, and inspired by some of classic literature's most beloved characters, The Secret Princess is the perfect blend of A Little Princess and The Secret Garden—and the perfect companion to Jo & Laurie.
Margaret Stohl is a #1 New York Times bestselling author, she has been published in fifty countries and thirty-two languages and has sold more than ten million books worldwide. She has published fifteen novels and graphic novels, as well as contributed to several games and countless comics since her debut. Learn more at mstohl.com and follow Margie on Twitter @mstohl and on Instagram @margaret_stohl.
Melissa de la Cruz is the #1 New York Times, #1 Publisher’s Weekly and #1 IndieBound bestselling author of many critically acclaimed and award-winning novels for readers of all ages. Her books have topped USA Today, Wall Street Journal and Los Angeles Times bestseller lists and have been published in more than twenty countries with over ten million copies in print. Her latest books include Never After, a middle grade fairytale series and High School Musical: The Musical: The Series: The Road Trip. Melissa de la Cruz lives in West Hollywood with her husband and daughter.
Praise for A Secret Princess:

“A charming mash-up of Frances Hodgson Burnett’s beloved classics A Secret Garden, A Little Princess, and Little Lord Fauntleroy . . . Will keep readers, especially fans of Burnett’s work, turning pages to see just how these distinct characters can define their futures.” —The Bulletin of the Center for Children’s Books

“It is refreshing to see diversity in the cast; Sara is Filipino and Cedric experiences seizures; their identities allow Stohl and de la Cruz to bring discussions of wealth, racism, and physical ailments to light in the 1860s.” —School Library Journal