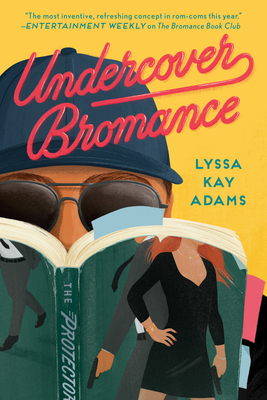 This is book number 2 in the Bromance Book Club series.

“Steamy, spicy, and tender, if this book were a gourmet meal it would be worth a thousand bucks for sure. Lyssa Kay Adams has outdone herself; her sophomore novel in the Bromance Book Club collection is even better than her debut. Liv is a firecracker, taking nothing from nobody. Mack is a big softie with a heart of gold. When they team up to take down a famous and powerful chef with a history of abusing women, there is nothing these two won’t risk — including their hearts. Please read this lovely romance; you will not regret it and it will make you a better person. And if you are a man, this should be required reading — study up, dudes.”
— Sam Butler, Bright Side Bookshop, Flagstaff, AZ

One of OprahMag.com’s Best Romances of 2020

Braden Mack thinks reading romance novels makes him an expert in love, but he’ll soon discover that real life is better than fiction.

Liv Papandreas has a dream job as a sous chef at Nashville’s hottest restaurant. Too bad the celebrity chef owner is less than charming behind kitchen doors. After she catches him harassing a young hostess, she confronts him and gets fired. Liv vows revenge, but she’ll need assistance to take on the powerful chef.

Unfortunately, that means turning to Braden Mack. When Liv’s blackballed from the restaurant scene, the charismatic nightclub entrepreneur offers to help expose her ex-boss, but she is suspicious of his motives. He’ll need to call in reinforcements: the Bromance Book Club.

Inspired by the romantic suspense novel they’re reading, the book club assists Liv in setting up a sting operation to take down the chef. But they’re just as eager to help Mack figure out the way to Liv’s heart. . .even though she’s determined to squelch the sparks between them before she gets burned.
Lyssa Kay Adams read her first romance novel in eighth grade after swiping one from her grandmother's book shelf and was hooked forever. After a nearly 20-year career as a journalist, her dreams of writing and publishing her own HEAs came true in 2015 with the release of her first novel, Seventh Inning Heat, followed by the RITA-nominated novella, Wild in Rio. Today, she writes full-time from her home in Michigan with a pesky, fluffy K9 assistant named Domino who spends most of his day snoring on her desk (that is, when he's not burying things around the house).
An Indie Next and LibraryReads Pick

“Nothing about Adams’s novel is simple, as it unfurls its catchy premise with surprising wisdom and specificity.”—New York Time Book Review

"The Bromance Book Club is a gloriously tongue-in-cheek celebration of all the things that make romance so entertaining. "—Entertainment Weekly

"Blending comedy, romance and social commentary, Undercover Bromance is an adorable, ambitious success for a rising star in the genre."—Book Page (starred review)

“Adams weaves in humor, complex emotions, and excerpts from the motivational story itself to create a satisfying courtship. A strong supporting cast, including Gavin’s book clubmates and his tiny, adorable twin daughters, helps flesh out the Legends community.”—Publishers Weekly

“Readers will look forward to more books in the Bromance Book Club series after this promising start.”—Booklist