Dear Papa: The Letters of Patrick and Ernest Hemingway (Hardcover) 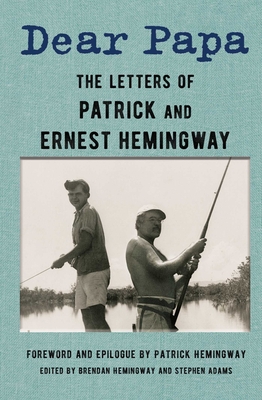 Dear Papa: The Letters of Patrick and Ernest Hemingway (Hardcover)


On Our Shelves Now
An intimate and illuminating glimpse at Ernest Hemingway as a father, revealed through a selection of letters he and his son Patrick exchanged over the span of twenty years.

In the public imagination, Ernest Hemingway looms larger than life. But the actual person behind the legend has long remained elusive. Now, his son Patrick shares the letters they exchanged over two decades, offering a glimpse into how one of America’s most iconic writers interacted with his children. These letters reveal a father who wished for his children to share his interests—hunting, fishing, travel—and a son who was receptive to the experiences his father offered.

Edited by and including an introduction by Patrick Hemingway’s nephew Brendan Hemingway and his grandson Stephen Adams, and featuring a prologue and epilogue by Patrick reflecting on his father’s legacy, Dear Papa is a loving and collaborative family project and a nuanced, fascinating portrait of a father and son.
Ernest Hemingway did more to change the style of English prose than any other writer of his time. Publication of The Sun Also Rises and A Farewell to Arms immediately established Hemingway as one of the greatest literary lights of the twentieth century. His classic novel The Old Man and the Sea won the Pulitzer Prize in 1953. Hemingway was awarded the Nobel Prize for Literature in 1954. His life and accomplishments are explored in-depth in the PBS documentary film from Ken Burns and Lynn Novick, Hemingway. Known for his larger-than-life personality and his passions for bullfighting, fishing, and big-game hunting, he died in Ketchum, Idaho on July 2, 1961.

Patrick Hemingway is the middle child of Ernest’s three sons. Born in Kansas City, Missouri, in 1928, he grew up in Key West, Florida. He graduated from Harvard University and pursued a career as a professional hunter in Tanzania, Africa, and later became an instructor at The College of African Wildlife Management Mweka. There he served as a Forest Officer Wildlife seconded from the Food and Agricultural Organization of the UN (FAO). He retired to Bozeman, Montana, where he lives with his wife and family.
"A son’s loving memorial to his famous father. . . . Edited by Patrick’s nephew Brendan Hemingway and grandson Adams, the letters reveal shared enthusiasms for fishing, hunting, African terrain, and rigorous adventure. . . . [Dear Papa is] an intimate glimpse into Hemingway family dynamics." —Kirkus Reviews