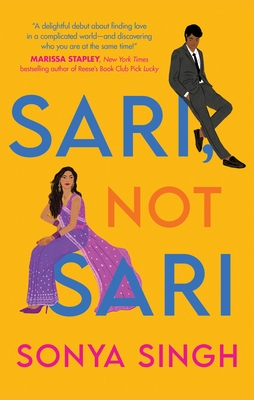 I never read romances - I'm more of a thriller reader. The title caught my attention (hilarious) and I had to dive in. Singh has a sharp wit, and an Indian wedding is such a fun setting. Spring is coming and I needed a smart read that would make me smile.

This delightful debut rom-com follows the adventures of a woman trying to connect with her South Asian roots and introduces readers to a memorable cast of characters in a veritable feast of food, family traditions, and fun.

Manny Dogra is the beautiful young CEO of Breakup, a highly successful company that helps people manage their relationship breakups. As preoccupied as she is with her business, she’s also planning her wedding to handsome architect Adam Jamieson while dealing with the loss of her beloved parents.

For reasons Manny has never understood, her mother and father, who were both born in India, always wanted her to become an “All-American” girl. So that’s what she did. She knows next to nothing about her South Asian heritage, and that’s never been a problem—until her parents are no longer around, and an image of Manny that’s been Photoshopped to make her skin look more white appears on a major magazine cover. Suddenly, the woman who built an empire encouraging people to be true to themselves is having her own identity crisis.

But when an irritating client named Sammy Patel approaches Manny with an odd breakup request, the perfect solution presents itself: If they both agree to certain terms, he’ll give her a crash course in being “Indian” at his brother’s wedding.

What follows is days of dancing and dal, masala and mehndi as Manny meets the lovable, if endlessly interfering, aunties and uncles of the Patel family, and, along the way, discovers much more than she could ever have anticipated.
Sonya Singh is a former entertainment reporter turned communications professional who has followed her dream of telling stories in front of the camera and now behind the scenes. Her debut novel, Sari, Not Sari, is an ode to her own personal dating experiences, during which she honed the art of writing the perfect break-up email/text. Sonya lives in Toronto, Canada. You can follow her at SonyaSinghBooks.com and on Instagram @SonyaSinghWrites.
“Has all the ingredients for the most delicious rom-com: family intrigue, workplace drama, an intrepid heroine, a beguiling love interest, laugh-out-loud moments, and a madcap supporting cast. I just loved this delightful debut about finding love in a complicated world—and discovering who you are at the same time!”
— MARISSA STAPLEY, New York Times bestselling author of Reese’s Book Club Pick Lucky

“Singh’s heartfelt novel drew me in from the first pages. Readers will root for Manny on her compelling journey of identity and self-discovery. Filled with humour, cultural insights, and love, Sari, Not Sari is a story that will make the hours fly by!”
— SAUMYA DAVE, author of What a Happy Family

“[A] delightful debut rom-com. . . . Chock-full of breakups and makeups, this energetic love story marks Singh as a writer to watch.”
— Publishers Weekly

“This romantic comedy has witty dialogue, likable characters, and a humorous tone. . . . The writing has moments of brilliance and insight that will resonate for the characters and readers alike. . . . This debut author’s career will be worth watching.”
— Library Journal