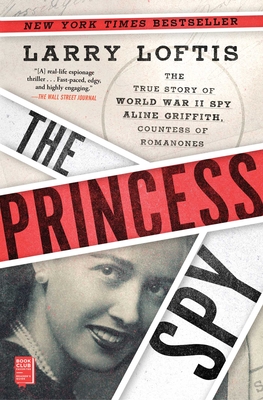 “As exciting as any spy novel” (Daily News, New York), The Princess Spy follows the hidden history of an ordinary American girl who became one of the OSS’s most daring World War II spies before marrying into European nobility. Perfect for fans of A Woman of No Importance and Code Girls.

When Aline Griffith was born in a quiet suburban New York hamlet, no one had any idea that she would go on to live “a life of glamour and danger that Ingrid Bergman only played at in Notorious” (Time). As the United States enters the Second World War, the young college graduate is desperate to aid in the war effort, but no one is interested in a bright-eyed young woman whose only career experience is modeling clothes.

Aline’s life changes when, at a dinner party, she meets a man named Frank Ryan and reveals how desperately she wants to do her part for her country. Within a few weeks, he helps her join the Office of Strategic Services—forerunner of the CIA. With a code name and expert training under her belt, she is sent to Spain to be a coder, but is soon given the additional assignment of infiltrating the upper echelons of society, mingling with high-ranking officials, diplomats, and titled Europeans. Against this glamorous backdrop of galas and dinner parties, she recruits sub-agents and engages in deep-cover espionage.

Even after marrying the Count of Romanones, one of the wealthiest men in Spain, Aline secretly continues her covert activities, being given special assignments when abroad that would benefit from her impeccable pedigree and social connections.

“[A] meticulously researched, beautifully crafted work of nonfiction that reads like a James Bond thriller” (Bookreporter), The Princess Spy brings to vivid life the dazzling adventures of a spirited American woman who risked everything to serve her country.
Larry Loftis is the New York Times, Wall Street Journal, USA TODAY, and internationally bestselling author of the nonfiction spy thrillers The Princess Spy, Code Name: Lise, and Into the Lion’s Mouth. A two-time winner of the Florida Book Award, his books have been translated into numerous languages and can be found in Spain, Portugal, Netherlands, Italy, Serbia, Czech Republic, Taiwan, India, Australia, New Zealand, and throughout the UK.
INSTANT NEW YORK TIMES, WALL STREET JOURNAL, AND USA TODAY BESTSELLER

“The Princess Spy is one of the most glamorous and thrilling espionage tales ever told." —Vannessa Cronin, Amazon Book Review

“An entertaining biography [with a] fast-moving narrative...Espionage buffs will be enthralled.” —Publishers Weekly

“A richly-detailed narrative full of twists and turns.”  —Library Journal

“Spellbinding…With splashes of glamour set against dire stakes and covert operations, The Princess Spy is a cross between Code Girls and The Only Woman in the Room .” —BookBub

“[A] thrilling romp across 20th-century Europe filled with intrigue and unforgettable characters, and will have any reader thinking twice about what they're revealing at their next upper-crust cocktail soiree.” —Town & Country

“If you enjoy reading about women doing their bit during World War II, you're going to love this.” —Woman’s Own Magazine (UK)

“[A] meticulously researched, beautifully crafted work of nonfiction that reads like a James Bond thriller." —Bookreporter

“As exciting as any spy novel.” —New York Daily News