Brain on Fire: My Month of Madness (Paperback) 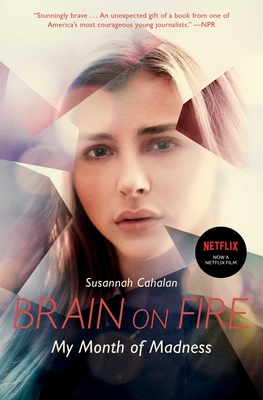 “A young reporter's near-death experience started with what seemed to be a bedbug bite, followed by an out-of-character migraine. Cahalan forgot a pitch meeting. She snooped on her boyfriend's email. Beloved newspaper clippings were tossed. Garbage piled up in her apartment. And then the seizures began. This compelling story of one woman's descent into madness and the equally horrifying journey of her family to find suitable help works both as a great literary memoir as well as a well-reported medical mystery. You might say the result is Girl, Interrupted with a dash of The Hot Zone and a sprinkling of The Exorcist!”
— Daniel Goldin, Boswell Book Company, Milwaukee, WI

An award-winning memoir and instant New York Times bestseller that goes far beyond its riveting medical mystery, Brain on Fire is the powerful account of one woman’s struggle to recapture her identity.

When twenty-four-year-old Susannah Cahalan woke up alone in a hospital room, strapped to her bed and unable to move or speak, she had no memory of how she’d gotten there. Days earlier, she had been on the threshold of a new, adult life: at the beginning of her first serious relationship and a promising career at a major New York newspaper. Now she was labeled violent, psychotic, a flight risk. What happened?

In a swift and breathtaking narrative, Susannah tells the astonishing true story of her descent into madness, her family’s inspiring faith in her, and the lifesaving diagnosis that nearly didn’t happen. “A fascinating look at the disease that...could have cost this vibrant, vital young woman her life” (People), Brain on Fire is an unforgettable exploration of memory and identity, faith and love, and a profoundly compelling tale of survival and perseverance that is destined to become a classic.

Susannah Cahalan is a news reporter at the New York Post whose award-winning work has also been featured in The New York Times. She lives in Jersey City, New Jersey.

“A fascinating look at the disease that – if not for a nick-of-time diagnosis – could have cost this vibrant, vital young woman her life.”
— People magazine

“The bizarre and confounding illness that beset the 24-year-old New York Post reporter in early 2009 so ravaged her mentally and physically that she became unrecognizable to coworkers, family, friends, and—most devastatingly—herself… She dedicates this miracle of a book to ‘those without a diagnosis’… [An] unforgettable memoir.”
— Elle

“This fascinating memoir by a young New York Post reporter…describes how she crossed the line between sanity and insanity…Cahalan expertly weaves together her own story and relevant scientific information…compelling.”
— Booklist (starred review)

"An intense, mesmerizing account of survival. . . Cahalan's deft descriptions of her spooky hallucinations could be right out of a Poe terror tale."
— BookForum

“For the neurologist, I highly recommend this book on several grounds…First, it is a well-told story, worth reading for the suspense and the dramatic cadence of events…Second, it is a superb case study of a rare neurologic diagnosis; even experienced neurologists will find much to learn in it…Third, and most important, it gives the neurologist insight into how a patient and her family experienced a complex illness, including the terrifying symptoms, the difficult pace of medical diagnosis, and the slow recovery. This story clearly contains lessons for all of us.”
— Cognitive and Behavioral Neurology

“Focusing her journalistic toolbox on her story, Cahalan untangles the medical mystery surrounding her condition…A fast-paced and well-researched trek through a medical mystery to a hard-won recovery.”
— Publishers Weekly

"The best reporters never stop asking questions, and Cahalan is no exception...The result is a kind of anti-memoir, an out-of-body personal account of a young woman's fight to survive one of the cruelest diseases imaginable. And on every level, it's remarkable.....Cahalan is nothing if not tenacious, and she perfectly tempers her brutal honesty with compassion and something like vulnerability. It's indisputable that Cahalan is a gifted reporter, and Brain on Fire is a stunningly brave book. But even more than that, she's a naturally talented prose stylist — whip-smart but always unpretentious — and it's nearly impossible to stop reading her, even in the book's most painful passages....Brain on Fire comes from a place of intense pain and unthinkable isolation, but finds redemption in Cahalan's unflagging, defiant toughness. It's an unexpected gift of a book from one of America's most courageous young journalists."
— NPR.org

“What is most impressive about “Brain on Fire” is that Cahalan has little recollection of her month of insanity…. Thanks partially to her talent as a journalist and to the fact that her parents kept journals, Cahalan was able to recapture her month, leaving no holes in the narrative.”
— The Daily Texan