Resistance: A Songwriter's Story of Hope, Change, and Courage (Hardcover) 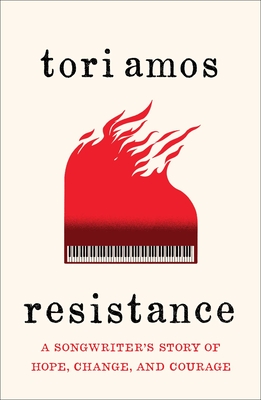 Resistance: A Songwriter's Story of Hope, Change, and Courage (Hardcover)


Availability to be confirmed
AN INSTANT NEW YORK TIMES BESTSELLER

A timely and passionate call to action for engaging with our current political moment, from the Grammy-nominated and multiplatinum singer-songwriter and New York Times bestselling author Tori Amos.

Since the release of her first, career-defining solo album Little Earthquakes, Tori Amos has been one of the music industry’s most enduring and ingenious artists. From her unnerving depiction of sexual assault in “Me and a Gun” to her post-September 11 album, Scarlet’s Walk, to her latest album, Native Invader, her work has never shied away from intermingling the personal with the political.

Amos began playing piano as a teenager for the politically powerful at hotel bars in Washington, DC, during the formative years of the post-Goldwater and then Koch-led Libertarian and Reaganite movements. The story continues to her time as a hungry artist in Los Angeles to the subsequent three decades of her formidable music career. Amos explains how she managed to create meaningful, politically resonant work against patriarchal power structures—and how her proud declarations of feminism and her fight for the marginalized always proved to be her guiding light. She teaches us to engage with intention in this tumultuous global climate and speaks directly to supporters of #MeToo and #TimesUp, as well as young people fighting for their rights and visibility in the world.

Filled with compassionate guidance and actionable advice—and using some of the most powerful, political songs in Amos’s canon—this book is for anyone determined to steer the world back in the right direction.
Tori Amos is a Grammy-nominated singer-songwriter, pianist, composer, and, with Ann Powers, the New York Times bestselling author of Tori Amos: Piece by Piece.
“Soulful. . . . This memoir and call to action will delight Amos’s many fans.” —Publishers Weekly

"A dramatically inspired volume of lyrics and legacy presenting Amos as an artist, an activist, and a sharp, thoughtful musician with a commanding voice. A profound autobiographical playlist and radically political call to action primarily for Amos fans." —Kirkus Reviews

“Thoughtful . . . [Resistance] will sing to anyone with an artistic soul.” —Booklist

"Resistance succeeds at allowing us to observe, through Amos' reflections, the experiences, events, stories, and feelings that resulted in some of her most beloved works and, to a small extent, her upcoming album." —Edge Media Network

"Prolific singer-songwriter Tori Amos is never one to mince words, and her new book Resistance offers a compelling manifesto for all artists who need to speak their truth and might fear push back in politically tumultuous times." —GRAMMY.com