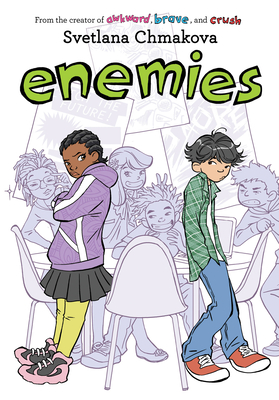 This is book number 5 in the Berrybrook Middle School series.

Felicity’s sure she’s going to do something big. Exactly what is still a mystery, but she’ll figure it out. Her sister, Letty, teases Felicity that she never finishes stuff, but that’s just because Letty is so perfect. Still, life is good with plenty of friends—drawing with the art club and playing games with her buddies keep her busy. But when she decides to join a contest to show Letty that she CAN get things done, Felicity begins to wonder if friends becoming enemies is easier than she thought. Are they really enemies, though…? What does it even mean to be enemies? And…who is it that she needs the most on her side…?
Svetlana Chmakova was born and raised in Russia until the age of 16, when her family emigrated to Canada. She quickly made a name for herself with works like Dramacon, Nightschool, the manga adaptation of James Patterson's Witch & Wizard, and the webcomic Chasing Rainbows. She graduated from Sheridan College with a three-year Classical Animation Diploma. Her latest work for middle grade readers, Awkward, has been a runaway critical success and was named one of YALSA's 2016 Top Ten Great Graphic Novels for Teens!