Damnatio Memoriae - VOLUME I: Victory Without Peace: They Shall Not Be Forgotten (Paperback) 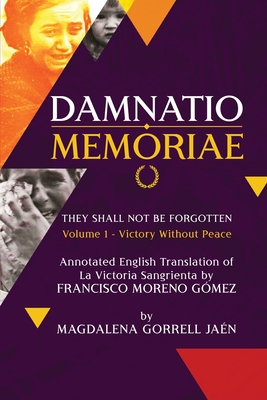 Damnatio Memoriae - VOLUME I: Victory Without Peace: They Shall Not Be Forgotten (Paperback)

The Spanish Civil War that began 17 July 1936 with Franco's military coup, did
not end with the defeat of the supporters of the legal government 1 April 1939.
From the moment the first shot was fired, the military insurgents embarked on a
wave of massacre, torture and repression against half of the Spanish population
that was terrorized, helpless for 40 years, until Franco's death in 1975. Aside
from a brief lifting of the forced lid of silence in the 1950s, the rest of the world
remains ignorant of the genocide that, closely modelled on Hitler's methods
in Nazi Germany, led to the post-war slaughter of tens of thousands by firing
squad or extra-legal methods buried, unidentified, by the hundreds in mass
graves, many of which are only now being uncovered.

Damnatio Memoriae, supported by dozens of eye-witness interviews, addresses
this dark period in great detail as it sheds light on the repression that destroyed
the lives of hundreds of thousands of dissenting men and women imprisoned
for many years in more than 180 concentration camps, countless prisons and
slave labour workers battalions where many died from torture, starvation and
disease. Today, the surviving relatives of this half of the Spanish population,
especially children who were taken from their parents to be re-educated, are
attempting to identify the remains of the lost members of their families, give
them some dignity in death, and obtain some closure to their pain.