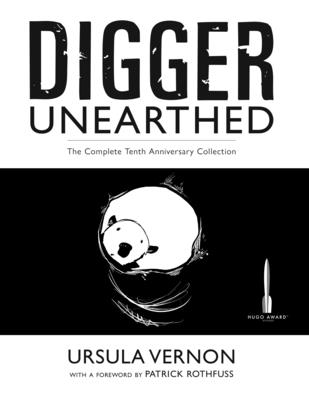 The story of a wombat on an incredible journey of discovery Kurt Busiek calls "utterly charming with a delightful (and refreshingly practical) hero."

Digger Unearthed is the story of a shrewd, sensible wombat engineer named Digger-of-unnecessarily-convoluted-tunnels, who finds herself stranded in a fantasy world that is far from logical. Thrust into the middle of a puzzling and often perilous situation involving gods, demons, destiny, and redemption, she finds her way based on a pragmatic honesty and the sincere belief in doing the right thing.

This tale manages to be both serious and light-hearted: it explores complex themes of honor, responsibility, and the gray areas between right and wrong, but it does so with a frequent application of humor, wit, and absurdity that makes the journey fun.

To celebrate its tenth anniversary, Digger Unearthed offers the complete webcomic collection in a single volume that can be fully enjoyed by young adult readers, yet also contains layers of sophistication that become deeper and more meaningful with age and experience.
Ursula Vernon is the author and illustrator of Nurk, Digger, Dragonbreath, Castle Hangnail, and Hamster Princess. Her Eisner-nominated comic "Digger" won the Hugo Award for Best Graphic Story and the Mythopoeic Award, and her children's book Dragonbreath won the Sequoyah Award in 2013.Ursula grew up in Oregon and Arizona, went to college at Macalester College in Minnesota, and stayed there for ten years, until she finally learned to drive in deep snow and was obligated to leave the state.Having moved across the country several times, she eventually settled in Pittsboro, North Carolina, where she works full-time as an artist, writer, and creator of oddities. She lives with her husband, a beagle, and a small collection of cats.