Brave Hearted: The Women of the American West (Hardcover) 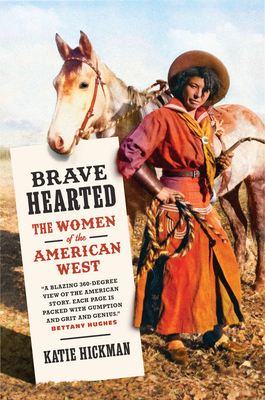 Brave Hearted: The Women of the American West (Hardcover)


On Our Shelves Now
"Brave Hearted is not just history, it is an incredibly intense page-turning experience. To read what these women endured is to be transported into another universe of courage, loss, pain, and occasionally victory. This book is a triumph."--Amanda Foreman
"Absolutely compelling"--Christina Lamb, Sunday Times (UK)
The dramatic, untold stories of the diverse array of women who helped transform the American West.Hard-drinking, hard-living poker players and prostitutes of the new boom towns; wives and mothers traveling two and a half thousand miles across the prairies in covered-wagon convoys, some of them so poor they walked the entire route; African-American women in search of freedom from slavery; Chinese sex-workers sold openly on the docks of San Francisco; Native American women brutally displaced by the unstoppable tide of white settlers - these were the women who settled the American West, whose stories until now have remained mostly untold. As the internationally bestselling historian Katie Hickman writes, "Myth and misunderstanding spring from the American frontier as readily as rye grass from sod, and--like the wiry grass-- seem as difficult to weed out and discard." But the true-life story of women's experiences in the Wild West is more gripping, heart-rending, and stirring than all the movies, novels, folk-legends, and ballads of popular imagination.Drawing on letters, diaries, and other extraordinary contemporary accounts, sifting through the legends and the myths, the laws and the treaties, Katie Hickman presents us with a cast of unforgettable women, all forced to draw on huge reserves of resilience and courage in the face of tumultuous change: the half Cree, Marguerite McLoughlin, the much-admired "First Lady" of Fort Vancouver; the Presbyterian missionary Narcissa Whitman, who in 1837 became the first white woman to make the overland journey west across the Rocky Mountains; Biddy Mason, the Mississippi slave who fought for her freedom through the courts of California; Olive Oatman, adopted by the Mohave, famous for her facial tattoos.This is the story of the women who participated in the greatest mass migration in American history, transforming their country in the process. This is American history not as it was romanticized but as it was lived.
Katie Hickman is the author of nine previous books, including two international bestsellers of history. She has also written two highly acclaimed travel books, and a trilogy of historical novels, which between them have been translated into twenty languages. Born into a diplomatic family, Hickman had a peripatetic childhood, growing up in Spain, Ireland, Singapore, and South America. She lives in London on a converted barge on the River Thames.