Math Girl and the School Squad: It's only the Beginning (Paperback) 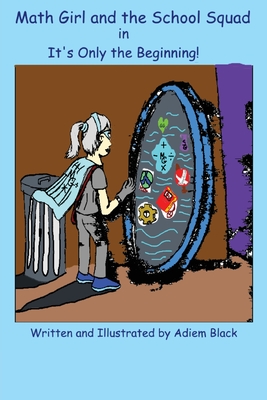 By Adiem Black
$9.99
Usually Ships in 1-5 Days
This book cannot be returned

The origin story of seven kids who become super heroes. The original team of adult heroes is missing, and a young girl with powers takes it upon herself to defend the city until she finds them. She knows she can't do it alone though, and while her day time persona isn't very popular, she makes full use of her super hero alter ego to make friends with her fellow students who also hide their strange and school-based powers.

The general idea for the series is the following: Math Girl's skills in mathematics enable her to do a lot, but with her team, the School Squad, nothing is impossible. Science Girl is raised by her father after her mother went missing, supposedly dying in the explosion caused by the last battle between the heroic team of the Academics against the evil Hacker. Math Girl assures her that her mother is still alive, just needing to be rescued. Tobor lives a lonely but enriched life. Math Girl opens his eyes to a new world by showing him that he can use his talents to help others, rather than be ashamed and hide them. Sporticus is your typical jock type student with a rough home life. Math Girl and their friends show him that he doesn't need to be what his father expects him to be, just who he wants to be. History Girl is always looking at the present and trying to plan for the future, but with her new friends help, she learns that you can use the past, not just for tests, but also to plan ahead. Book Worm and Gamer are two foster kids who only trust each other. Upon learning that Math is also their cousin, they are opened up to a new world of ideas and possibilities on what they can do, and eventually, how to trust their new teammates.

As this series progresses, you'll be brought into their home lives as well as the lives of their super hero alter egos. I promise you, this series will be like nothing you've ever seen before written as a children's book series, and in a way that children will be more comfortable to say "That's just how it is." than adults. There will be all sorts of things that are simpler than you expect, and yet more complex than you realize, from hidden school lessons to teach the readers how the Squad's powers work, to dealing with bullies and hardships from not only school, but home as well. The reading level is all over the place probably, but kids, this book series might just not be safe for adults this time around. Can they handle "Our reality"?