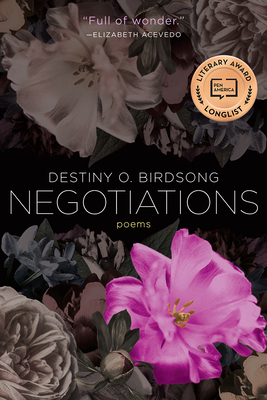 In this unflinching powerhouse of a debut, Birdsong mines her experiences of assault, disease, rage, assertiveness, and longing as a Black woman. Grounded in the body, both personal and communal, she takes form, meter, and imagery to fresh and thoroughly unexpected places. These poems are fearless and fierce as she transcends trauma, tender and contemplative as she creates joy.

A Best Book of the Year at BuzzFeed, Refinery29, and Entropy Magazine

What makes a self? In her remarkable debut collection of poems, Destiny O. Birdsong writes fearlessly towards this question. Laced with ratchetry, yet hungering for its own respectability, Negotiations is about what it means to live in this America, about Cardi B and top-tier journal publications, about autoimmune disease and the speaker’s intense hunger for her own body—a surprise of self-love in the aftermath of both assault and diagnosis. It’s a series of love letters to black women, who are often singled out for abuse and assault, silencing and tokenism, fetishization and cultural appropriation in ways that throw the rock, then hide the hand. It is a book about tenderness and an indictment of people and systems that attempt to narrow black women’s lives, their power. But it is also an examination of complicity—both a narrative and a black box warning for a particular kind of self-healing that requires recognizing culpability when and where it exists.

Destiny O. Birdsong is a Louisiana-born poet, fiction writer, and essayist. She has received fellowships from Cave Canem, Callaloo, Jack Jones Literary Arts, the Ragdale Foundation, and the MacDowell Colony, and won the Academy of American Poets Prize, Naugatuck River Review’s 2016 Narrative Poetry Contest, and Meridian’s 2017 “Borders” Contest in Poetry. She earned both her MFA and PhD from Vanderbilt University, and now lives and works in Nashville, Tennessee.
Stunning. . . . A powerful paean to Black womanhood—to resilience, and, especially, triumph.
— Refinery29

Destiny O. Birdsong is a phenomenal poet. . . . Negotiations signals the arrival of a voice we should all be paying attention to, one that thoughtfully and purposefully broadens our thinking about the interiority of Black women’s lives.

Birdsong’s poems reveal the ways that so many borders—nation, race, gender—are structured to maintain hierarchies of allegiance and care. . . . The emergencies of the present are scored through with the fault lines of the past. Birdsong’s poems transform as they touch.
— The Paris Review

The splintered chorus of the poems’ speakers heal themselves, feed themselves, love themselves; become their own lovers as they re-negotiate their relationships to self. Birdsong writes her body and the bodies of Black women before and alongside her inside out—bones, viscera, blood at the back of the throat—to arrive at a transcendence of Black women’s bodies beyond sites of violence.
— The Rumpus

The 34 poems in the volume are extremely readable, so much so that it’s tempting to rush through them. Don’t. Take your time. Ease into these poems. They’re worth it.
— The Nashville Scene

Negotiations is made rich by its natural complexity, with few stones left unturned—poems address silencing, fetishization, tokenism and cultural appropriation with fierce honesty, the sum of which amount to an artfully written love letter to Black women in America. In Birdsong's debut, every angle of the self is worthy of recognition.

Reading Negotiations is like walking into a boxing match with an indefatigable fighter; you will be struck, and it will hurt. But for all of its ferocity in how it grapples with womanhood, sexuality, assault, and race, this collection is also full of wonder. Of forgiveness. Of tenderness, the like of which, ultimately, delivers the most powerful sucker punch.

Reading Negotiations is like grabbing a piece of metal so cold it feels like fire in your palm. . . . A collection that is equal parts pain and power.

An extraordinary string of immaculate, brutal narratives about systemic violence and racism, and their repercussions for Black American women. . . . Birdsong’s striking imagery and contagious fervor are a potent salve against apathy and foreboding.
— Publishers Weekly, Starred Review