The South and The West of It: Ireland and Me (Hardcover) 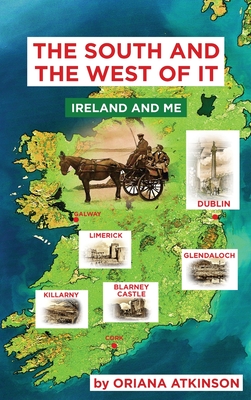 By Oriana Atkinson, Dale Steve Gierhart (Editor)
$35.50
Availability to be confirmed
This book cannot be returned

In her time Oriana Atkinson (1895-1989) was a successful writer, showcasing a wit and no small amount of feminism that was evident in both her fiction and non-fiction works. The feminism was not in your face but was subtlety inserted in subjects from her travels the world over with her husband, Pulitizer Prize winning and New York Times drama critic Brooks Atkinson. In her famous book of her and Bruce's ten months in Russia in 1945-46, Over at Uncle Joe's: Moscow and Me (1947), Oriana comments rather sardonically "that the Soviet Union today would not be so far advanced as it is if it were not for the manual labor of its women," though it is clear that the war-torn, down-trodden city is not her favorite travel site.

On a similar take in The South and the West of It: Ireland and Me (1956), Oriana shows a much warmer appreciation for this other down-trodden country of the time. Yet, she again reflects a humorous take on the many aspects of social and business intercourse that she enjoyed with a fellow traveler, the anonymous "Miss Witlov," a name she created to protect the identity of a famous friend (who as it turns out was the retired actress Marie Doro of stage and screen fame).

In this memoir Oriana is once more at her best, providing insight into Irish topics with comedic pokes at everything from the trilling beauty of the Irish language, to lack of heaters in hotels to the tie between Guiness (the drink) and sex. And while she is at it, she dissects the impact of their prudish (at least 1950s) attitude on relations between the opposite sex in showcasing Irish women who move to the States to find a mate. Why? Because the average Irish male was so trained in the "wiles" of women, that they distrusted any such relationship as a trap for marriage. Along the way there is a dash of the Irish Sweepstakes and horse-breeding, leprechauns, banshees and fairies, and a glimpse into the long torn relationship between Ireland and England, topping it off with Blarney Castle and its famous stone.

Take a stroll through Ireland with Oriana and you will find not only humor, but understanding and knowledge, not a bad thing for a day at home in your favorite chair or waiting on an airline to arrive. She, maybe not the airline, will then whisk you to this magical land of fact and fantasy.