The Walmart Book of the Dead (Paperback) 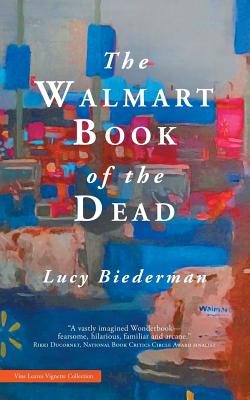 By Lucy Biederman
$9.99
Usually Ships in 1-5 Days
This book cannot be returned

As for who reads this book

And who follows its spells

I know your name

You will not die after your death

You will not perish forever

For I know your name

So begins this darkly comic incantation on the gods and scourges of the 21st century. The Walmart Book of the Dead was inspired by the ancient Egyptian Book of the Dead, funerary texts with accompanying illustrations containing spells to preserve the spirit of the deceased in the afterlife. In Lucy Biederman's version, shoplifters, grifters, drifters, and hustlers, desirous children, greeters, would-be Marxists, wolves, and circuit court judges wander Walmart unknowingly consigned to their afterlives.

"This BOOK is for the dark hours, the seam that ties the end of the evening to sunrise, when the bad, wrong things people do in and around Walmart are a hospital infection, red Rit dye in a load of whites, a gun in a classroom: by the time the problem is identified, it's already ruined everything."