3 Seconds in Bogotá: The gripping true story of two backpackers who fell into the hands of the Colombian underworld - LARGE PRINT HARDBACK (Hardcover) 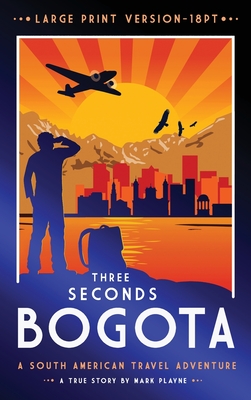 By Mark Playne
$29.99
Backordered
This book cannot be returned

A South American adventure. A trip to die for.

Colombia 1994. 150,000 people have been 'disappeared' and two young adventure-seeking backpackers are about to be added to the list.

'We were going to be killed.

A pair of rich-country passports?

The clothes that we were wearing?

They didn't know about the silver.

Or about the money I had hidden on me.

But of course, they'd be finding it.

A glint as the knife blade moved.

3 Seconds in Bogot is the true story of a British traveller who alongside his girlfriend, fell into the hands of the Colombian underworld. Confronted with their imminent murder he delves into his deepest memories searching for any clue that might provide a means of survival. Should he follow his logical mind or his gut instinct? He has three seconds left to decide.

Mark Playne travelled the world working as an artisan before returning to storytelling and is now a multi-award-winning screenwriter and film director best known for his films set overseas.

3 Seconds in Bogot , the first book in his series 'World Wild Travel Tales', is fast-paced, humorous travel-adventure around the countries of South America during the time of Escobar. A thrilling travel memoir wrapped up within the razor edge suspense of a true terrifying life or death decision at the hands of the Colombian underworld.