A Good Time Ago (Paperback) 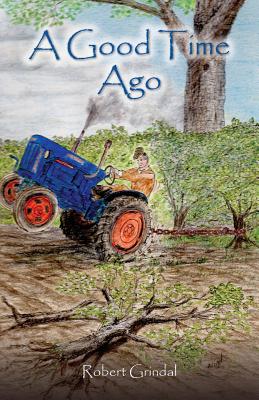 By Robert Grindal
$6.50
Availability to be confirmed

This series of illustrated stories is based on the experiences of twin boys, Robert and Peter, born in 1943 and raised on a mixed farm in Warwickshire.

Robert's detailed and humorous memories progress from his previous book 'No Ordinary Day'.

The description of his windfall eating overweight pony that might have put Thelwell's version in the shade, village cricket beset with unforeseen difficulties, the discovery of liquid gold and the excitement of speedway in its heyday paint engaging pictures. The twins apprehension is evident at the start of their weekly boarding schooldays where the school was run along military lines; and where they were exposed to the eye widening form of their English mistress and her interesting class exercises.

The idiosyncrasies of farm machinery, judging cattle, training and showing livestock at local shows together with just what happens as a result of a bull being spooked during the Grand Parade all make for entertaining reading. It includes the unlikely circumstance of a grand banquet in the cowshed, well-scrubbed and decorated to the rafters and grass seed fiddling with a modern twist.

It continues with some inadvisable and inflammatory events during Robert's days at agricultural college and the sadness of his father's farm sale in 1987.

The book culminates with an amusing and self-effacing description of his retirement, involving the arrival of a horsebox in response to a perceived misdemeanour occurring ten years previously.

This gives a real taste of country life with particular bias to the incongruous and bizarre aspects that are never too distant when handling farm implements and animals.