Jewels from the Sea: Pearl Fishing in the Arabian Gulf (Paperback) 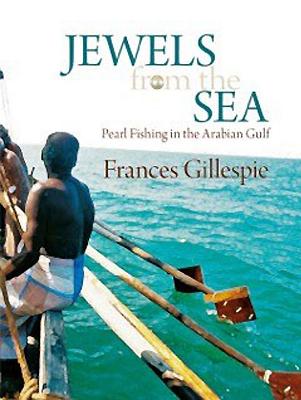 Today, the citizens of the Arabian Gulf states enjoy an affluent and sophisticated lifestyle and the term 'oil state' conjures up images of vast, air-conditioned shopping malls, gleaming high-rise towers, green parks and sparkling fountains, fast new highways and the latest automobiles - all the trappings of luxury that man can devise. But it was not always so. Once, the people of the Gulf looked to another natural substance as a source of income: not oil, but pearls. Frances Gillespie is well known for her best-selling books on the region for children and adults. In this, her latest work, she tells the fascinating story of pearl fishing in the Gulf. It was a harsh and dangerous way of life for the men at sea, and a hard and lonely life for the women they left behind. But although the life of the divers and their womenfolk was hard, it was also time of togetherness and friendship, shared triumphs and disasters, of joy in finding a perfect pearl, of songs and laughter - each man daily placing his trust in Allah and in the help of his companions. At the beginning of the 20th century the economy of every Gulf state on the Arabian coast depended on pearling. When an enterprising Japanese man perfected the method of cultivating perfectly formed, spherical pearls, within a couple of decades the industry collapsed. At the same time, the discovery of oil proved both a blessing and a curse. Many pearlers abandoned their way of life and left the area, but others stayed and reaped the benefits of the flow of liquid gold. Frances Gillespie describes the men and women whose lives revolved around the 'tears from heaven' not only the divers but the crews and their masters, the merchants and traders, the boat builders and sailmakers, and the craftsmen and jewelers who made from pearls the most beautiful adornments, which were sought after by emperors and sultans. She explains how pearls are formed, what equipment was used to harvest them and how they were graded, and tells of the songs and seasons, and of the dangers that lurked beneath the sea. Jewels from the Sea is aimed at a general readership from youngsters upwards and is published through the generosity of Maersk Oil (Qatar). It is lavishly illustrated with photographs from the first to last days of pearling and (like Hidden in the Sands: Uncovering Qatar's Past) features the superb paintings of artist Norman MacDonald. Jewels from the Sea is available in English (ISBN: 978-1-909339-29-3) and Arabic (ISBN: 978-1-909339-30-9), in conjunction with an interactive website which features text and pictures from the printed books, quizzes and games, links to additional information, and a teachers' resource pack for schools and educational establishments. Visit jewelsfromthesea.qa.