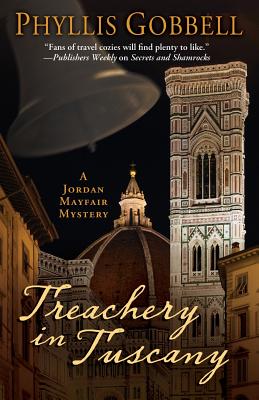 This is book number 3 in the Jordan Mayfair Mystery series.

Church bells chime in an ancient bell tower as architect Jordan Mayfair, from Savannah, Georgia, and her travel-writer uncle, Alexander Carlyle, arrive at Convento di Santa Francesca Firenze in Florence, Italy. Jordan expects the 15th century convent with its exquisite gardens to offer a safe and serene retreat from the crowded, bustling, touristy district of Europe's premier Renaissance city, and anticipates a romantic interlude with Paul Broussard, charming patron of the arts, who is flying in from Paris, just for her.

But the polizia municipale are on site, investigating a burglary by jewel thieves, and a mugging has occurred outside the convent walls. Several guests of the convent are not who they seem to be, and one is soon dead. A suicide, the police say. Jordan suspects murder.

Her attempt to find justice for the victim leads her to discoveries as dark as the labyrinths of the convent that she explores with an architect's eye, and as far-reaching as the spectacular Tuscan hills. But Jordan's findings give little comfort as she uncovers the truth about Paul's unstable daughter, Bella, who has come to Florence with evil intentions. In the third book of the Jordan Mayfair Mystery Series, treachery tears a prominent family apart, takes an innocent life, and threatens Jordan's relationship with Paul that has evolved, through three books.