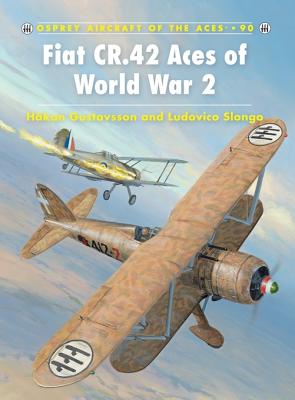 The Fiat CR.42, a logical development of the Fiat CR.32, was the last single-seat fighter biplane to be produced. It entered service with the Italian Regia Aeronautica in May 1939 before being exported to Belgium, Hungary and Sweden. Its combat debut came when the Belgian air force threw its fleet into action during the German invasion of the Low Countries on 10th May 1940. Despite being quickly overwhelmed, the Belgian pilots managed to make a number of aerial claims. The CR.42 became heavily involved in the fighting in North Africa and although it was gradually replaced by more modern fighters, it continued in a point defence and ground support role until the end of the war. Drawing on research from a range of sources, this book examines the extensive employment of the Italian fighter plane during the course of World War II.

Swede H kan Gustavsson has researched the use of biplane fighters in World War 2 for many years. He has been in contact with numerous pilot veterans, and their families, over the past two decades, unearthing first-hand accounts and other invaluable material relating to their often forgotten wartime exploits.

Ludovico Slongo is a promising aviation historian based in the Italian city of Padova. He has been researching the history of military aviation during the World War 2 for more than 15 years, focusing on the Italian Regia Aeronautica.