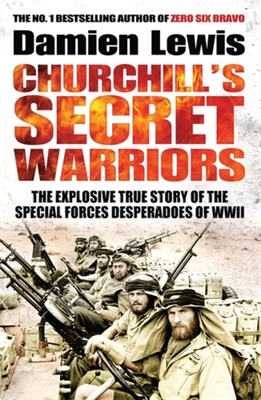 By Damien Lewis
$0.01
Availability to be confirmed

From the award-winning historian, war reporter, and author Damien Lewis (Zero Six Bravo, Judy) comes the incredible true story of the top-secret "butcher-and-bolt" black ops units Prime Minister Winston Churchill tasked with stopping the unstoppable German war machine. Criminals, rogues, and survivalists, the brutal tactics and grit of these "deniables" would define a military unit the likes of which the world had never seen.
When France fell to the Nazis in 1940, Churchill declared that Britain would resist the advance of the German army--alone if necessary. Churchill commanded the Special Operations Executive to secretly develop of a very special kind of military unit that would operate on their own initiative deep behind enemy lines. The units would be licensed to kill, fully deniable by the British government, and a ruthless force to meet the advancing Germans.
The very first of these "butcher-and-bolt" units--the innocuously named Maid Honour Force--was led by Gus March-Phillipps, a wild British eccentric of high birth, and an aristocratic, handsome, and bloodthirsty young Danish warrior, Anders Lassen. Amped up on amphetamines, these assorted renegades and sociopaths undertook the very first of Churchill's special operations--a top-secret, high-stakes mission to seize Nazi shipping in the far-distant port of Fernando Po, in West Africa.
Though few of these early desperadoes survived WWII, they took part in a series of fascinating, daring missions that changed the course of the war. It was the first stirrings of the modern special-ops team, and all of the men involved would be declared war heroes when it was all over.
The Ministry of Ungentlemanly Warfare focuses on a dozen of these extraordinary men, weaving their stories of brotherhood, comradely, and elite soldiering into a gripping narrative yarn, from the earliest missions to Anders Larssen's tragic death, just weeks before the end of the war.

Damien Lewis is a former war reporter. He is a prolific writer, penning over a dozen books, including Zero Six Bravo, War Dog, and Judy.

"One of the most extraordinary stories of World War II . . . an eloquent and welcome tribute to their selfless, sometimes reckless courage--a howitzer of a tale that more people should know about."—The Daily Mail

"A valuable addition to World War II history, and a harbinger of the sort of war that the United States and other countries are learning to wage in the 21st century."—Washington Times

"The narrative reads like a thriller penned by novelist Vince Flynn, except this book is based on historical facts and records as well as interviews with participants. After reading this informative and engaging book, one can only admire the courage, tenacity, and innate ingenuity of these military 'misfits' who served with little recognition or due respect."—Toy Solider and Model Figure Magazine