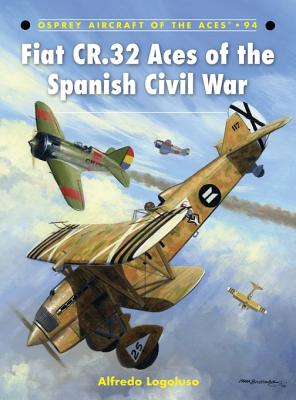 The CR.32 Falco was a handsome and highly manoeuvrable biplane fighter. During General Franco's fight with the Republicans for the control of Spain from 1936 - 39, no fewer than 477 CR.32s were involved, with an astounding 709 confirmed aerial victories, and an additional 320 kills claimed, for just 62 losses. As these statistics reveal, the CR.32 was the unrivalled master of the skies over Spain. By the war's end, the five leading aces of the conflict were all Spanish CR.32 pilots. Their exploits, and those of the other leading CR.32 aces, are examined for the first time in English in this exciting volume.

Alfredo Logoluso is an aeronautical engineer and formerly an officer the missile Air Defence section of the Italian Air Force. He has worked in both the military and civil aerospace industries. For many years he has researched the aeronautical history of the Spanish Civil War, writing numerous articles for Italy's specialist press on the subject. One of his primary contacts is Angelo Emiliani, who was the first Italian researcher to document the air war in Spain.