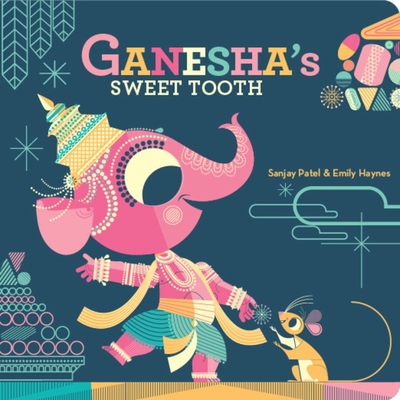 This book tells the story of how the god Ganesha came to write the epic poem of Hindu literature, the Mahabharata. There are so many details in the tale and in the art that I can imagine this book being read over and over again, and never getting boring! After Ganesha breaks his magical tusk on a jawbreaker, it takes a visit from the wise poet Vyasa to remind him that sometimes broken things contain the most magic!

— Becca
Now in board book, the bold, bright colors of India leap off the page in this fresh and funny picture book retelling of how Ganesha came to write the epic poem of Hindu literature, the Mahabharata.

Ganesha is just like any other kid, except he has the head of an elephant and rides around on a magical mouse. And he loves sweets, especially the traditional dessert laddoo. But when Ganesha insists on biting into a super jumbo jawbreaker laddoo, his tusk breaks off! Ganesha is terribly upset, but with the help of the wise poet Vyasa, he learns that what seems broken can actually be quite useful after all. With vibrant, graphic illustrations, expressive characters, and off-beat humor, this is a wonderfully inventive twist on a classic tale.

• Parents who want to expose their children to other cultures
• Families that practice Hinduism
• Educators looking for fresh takes on religious folktales and multicultural stories
Sanjay Patel is a supervising animator, storyboard artist, and short film director for Pixar Animation Studios, where he has worked on many features including A Bug's Life, Ratatouille, The Incredibles, and Cars 2. Sanjay is also the creator of Ramayana: Divine Loophole, The Big Poster Book of Hindu Deities, and The Little Book of Hindu Deities. He lives in Oakland, California. Learn more about Sanjay at Gheehappy.com.

Emily Haynes is an editor by day, specializing in entertainment, animation, and humor titles, and a writer and dreamer by night. This is her first children's book. She lives in Oakland, California.
“Originally a traditional picture book, this variation on a Hindu myth loses nothing in its transformation to a board book. . . . Deftly told with impish humor, [Ganesha’s Sweet Tooth] is visually stunning. . .”-Kirkus Reviews, starred review