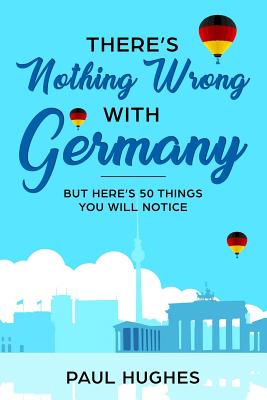 By Paul Hughes
$7.99
Usually Ships in 1-5 Days
This book cannot be returned

Whether you are visiting Germany, moving there, or just curious, this book provides you with a hilarious take on what makes Germany, German. In a country where Sauerkraut juice is an actual thing, you might be thinking it is going to be a real ordeal to get used to German life. And, while it's inevitable that some things you'll see in your first few months will surprise and shock you, there's truly nothing wrong with Germany... but you may notice a few things. Whether it's pooping on a shelf, never apologizing, or trying to break the sound barrier on the Autobahn, one thing is for sure; you are going to find a lot to love about Germany. You will read a lighthearted collection of things Paul Hughes personally noticed in his day-to-day life since emigrating from Britain in 2015 and marrying a German. It is the quirks and observations that in his opinion make Germany as unique, as it is beautiful. Paul shared his findings of Germany with a large ex-pat audience in the form of the US Army, when presenting the morning show on the American Forces Network between 2014 and 2018. Paul also writes for Wall Street International Magazine and features on several Expat websites. Paul also hosted a podcast with fellow expats called "The Paul "the Brit" Podcast -Life in Germany" which is available on iTunes.