From Jesus to Muhammad: Similarities Between Early Christianity and Islam (Paperback) 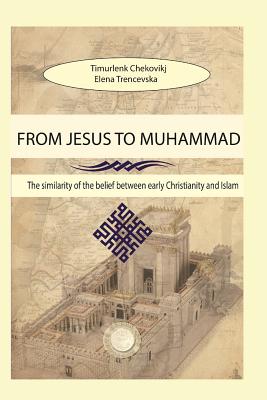 The book which is presented to the reader is written to answer many important questions, both classical and modern. It is, not surprisingly, that many previous books on comparison between the Islam and Christianity were written from the Christian position; even in scholarly research Islam has been seen through the lens of Christian religion and in the pattern of Christian belief. That is why in 60-ss of previous century a notable Harvard scholar, Wilfred Cantwell Smith wrote his "The Meaning and End of Religion" to question the validity of the concept of religion; he rightly noticed, that, for example, Islam describes it in terms of deen which essentially has a wider meaning than Latin religare/religere. Deen usually cover political, social and economical code for the happiness of the mankind, while the "religion" is merely a kind of internal belief. In contrast to the aforementioned works, the book by Elena Trencevska - Cekovic 'From Jesus to "Mohammed" presents another point of view. It is written not to "refute" some other religions, but, first of all, to present the truth of early religious history. At the beginning of the book, the authors shows a background of early Christianity and tries to reconstruct the true teaching of Isa (Jesus). Nowadays, due to apocrypha and availability of other early writings, one may see many other stories of Christianity, which are so far from "canonical." Especially, these stories are not new; already in the 2th century C.E. (Years before the Nicaea Council) many religious groups pretended to be the real followers of Jesus. The author shows this story, using the variety of sources in order to argue how many political reasons influenced the development of Christianity. Many parts of the book are dedicated to the personality of Isa and development of his image in both Christianity and Islam. Today, when to compare the Quranic vision of Isa to the early Christian sources, we may see many similar stories (for example, the Quranic narration about birds from the clue). This shows that Isa (for example, his early life) is a great mystery of history; but since we have a very small account about this in the Quran no one has a real proof to speculate about this. And this is why this book calls us not to start some polemics, but to consider the sacred text which gives the most authoritative stories to the believers. For Muslims, all the prophets - those who mentioned in the Old Testament, New Testament and the Qur'an and those which are not known to us by their names - called to obedience of one God. That is why Muslims in every period of Islamic history were interested in other religion - not merely to "refute" them, but to show, that the root of religion is the monotheism, and that polytheism is something make-believe only.