Something More Than Night (Paperback) 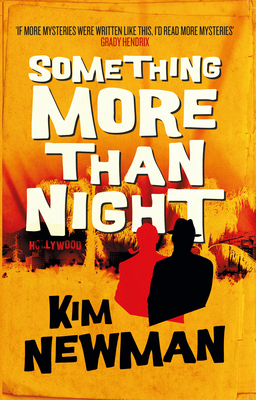 Something More Than Night (Paperback)

You're not going to believe this — Boris Karloff and Raymond Chandler are chasing bad guys together in 1930s Hollywood. Honestly, their friendship is really sweet. A hint of supernatural creeps into the mystery. Fans of Grady Hendrix and "meddling kids" will love this hilarious romp.

— Sissy
With his signature wit, the award-winning author of Anno Dracula, Kim Newman, reimagines the lives of Raymond Chandler and Boris Karloff in this daring and horrifying tale.

Hollywood, the late 1930s. Raymond Chandler writes detective stories for pulp magazines, and drinks more than he should. Boris Karloff plays monsters in the movies. Together, they investigate mysterious matters in a town run by human and inhuman monsters.

Joh Devlin, an investigator for the DA’s office who scores high on insubordination, enlists the pair to work a case that threatens to expose Hollywood’s most horrific secrets. Together they will find out more than they should about the way this town works. And about each other. And, oh yes, monsters aren’t just for the movies.
Kim Newman is a popular and respected author and movie critic, known for his acclaimed alternate-history series, Anno Dracula. He writes regularly for Empire magazine and contributes to The Guardian, The Times, Time Out and others. He makes frequent appearances on radio and TV, and is the chief writer of the BBC TV series Mark Kermode's Secrets of Cinema. He has won the Bram Stoker, International Horror Guild, British Fantasy and British Science Fiction Awards and been nominated for the Hugo, World Fantasy, and James Herbert Awards. He lives in London.

"A delicious homage to — and satire of — Hollywood in the studio era." - Los Angeles Review of Books

"Both an homage and a glorious reinvention, perfect for those nostalgic for the pulpy genre fiction of the past." - Publishers Weekly

"A convoluted, over-the-top, and deliciously twisted blend of hard-boiled mystery and horror: everything we expect from Newman, who writes as though he is having simply the best time in the world." -Booklist

"Newman’s noir teams Boris Karloff with Raymond Chandler to solve gothic crimes in a 1930s Hollywood full of man-made monsters, dodgy movie studios, and ice-cold gimlets. Written in a James Ellroy rat-a-tat it’s the perfect book for a summer afternoon by the pool with plenty of cocktails. If more mysteries were written like this, I’d read more mysteries." - Grady Hendrix, author of The Final Girl Support Group

"Monsters and mobsters and movie sets, oh my! Only Kim Newman could have written this glorious, insane noir mash-up." - M.R. Carey, author of The Book of Koli

"Kim Newman is the first to spot that between the worlds of Philip Marlowe and Frankenstein’s monster is an LA-noir sweet spot where crime and horror overlap. His odd-couple pairing of Boris Karloff and Raymond Chandler is a genius crime-solving idea that pays off big time; hard-bitten, tender and a killer double bill for film lovers." - Christopher Fowler, author of the Bryant & May Mysteries

"Movies, monsters and Kim Newman’s sharp wit – what a treat!" - Sarah Pinborough, bestselling author of Netflix's Behind Her Eyes

"Something More Than Night is what happens when an encyclopaedic knowledge of film collides with pulp noir and turns Raymond Chandler’s already mean streets into something altogether more eldritch and nasty. Classic Kim Newman." - Jon Courtenay Grimwood

"Kim Newman is slowly making his way into the canon of English literary greats, where he’d be both entirely at home and deeply uncomfortable. He describes perfectly the way fiction has invaded our real lives, and he got there first." - Paul Cornell, author of Witches of Lychford

"A monstrously inventive romp through the backlots, cults and conspiracies of Old Hollyweird, in the company of the best odd-couple pairing since Tony Curtis and Jack Lemmon." - Paul McAuley, author of War of the Maps

"Newman audaciously essays his own spin on the whipcrack wit of Chandler’s Philip Marlowe novels, carrying it off with panache." - Barry Forshaw, Financial Times

"An homage to a golden era of storytelling, with the chemistry between Karloff and Chandler rivalling any Hollywood double act. Intelligent, atmospheric, written with passion and wit, Something More Than Night is a must for fans of classic monsters and mysteries. A pure joy to read." - Rio Youers, author of Lola on Fire

"Lights! Camera! Murder! As Kim Newman brings his immense knowledge and love of literature and movies to his latest, genre-breaking novel, Something More Than Night. Nobody but Newman could pull off such an audacious and high-concept story, in which pulp writer Raymond Chandler and horror actor Boris Karloff team up to solve a murder mystery in 1930s Hollywood. For lovers of hard-boiled crime and all us “Monster Kids” out there, this is simply the perfect entertainment." - Stephen Jones, World Fantasy Award-winner

"Kim Newman is a national treasure. No one is better able at mixing horror and comedy, real history and dread fantasy. Something More Than Night is part film noir parody, part a delightful celebration of the heyday of Hollywood, and all imaginative epic – it’s as strong, heady and dangerous as the bathroom gin of the Prohibition speakeasys he recreates so well." - Robert Shearman, World Fantasy Award-winning author of ‘We All Hear Stories in the Dark’