Yay! You're Gay! Now What?: A Gay Boy's Guide to Life (Paperback) 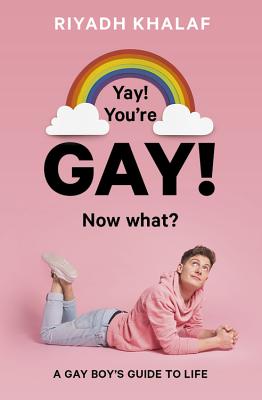 Yay! You're Gay! Now What?: A Gay Boy's Guide to Life (Paperback)


On Our Shelves Now
Yay! You're gay! Or maybe you're bi. Or maybe you just feel different…in time, that difference will become the greatest gift you could ask for. It will bring you love, a sense of identity, a new community, and eventually the freedom to be yourself. I promise!

In this personal, heartfelt go-to guide for young queer guys, broadcaster, YouTuber, and LGBT+ advocate Riyadh Khalaf shares frank advice about everything from coming out to relationships, as well as encouragement for times when you’re feeling low. There’s a support section for family and friends written by Riyadh’s parents and LOADS of hilarious, embarrassing, inspiring, and moving stories from gay boys from around the world. Plus, inspirational gay men including Stephen Fry, Clark Moore, and James Kavanagh share the advice they would give to their younger selves.

Packed with practical advice and bright, quirky illustrations and photos, this book contains chapters on:

Riyadh Khalaf is a journalist, YouTuber, and LGBT+ advocate. He is best known for his groundbreaking BBC docuseries Queer Britain in which he investigated issues affecting the queer community, including racism, eating disorders, religion, gender identity, and porn. He first came to prominence on YouTube where his comedy and LGBT+ videos made him a “gay big brother” to younger viewers looking for inspiration and help with their identities. His channel has amassed over 47 million views and been featured on outlets including CNN, NBC, The Guardian, Huffington Post, and BuzzFeed. Riyadh is now a regular host on BBC Radio 1’s Life Hacks and Unexpected Fluids shows, delving into young people’s mental health, sex and relationships.

"This book is part self-help, part memoir, part inspirational book for anyone who is coming to terms with what it means to be queer."—Tirzah Price, BookRiot

"Khalaf is gay and he uses his own personal anecdotes as tools to teach, but he’s not pious or pushy. Instead, there’s a whole lot of care and camaraderie in these pages, and the words “you are not alone” are not just written, they leap from each page."—Terri Schlichenmeyer, Washington Blade